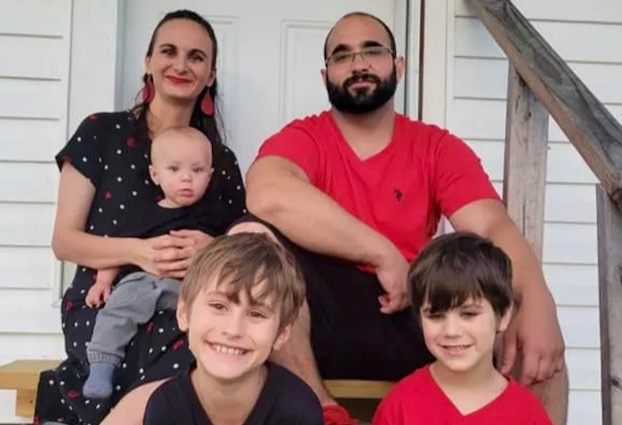 A GoFundMe account has been set up for the family of Hoyt Lejeune, 30, of Jennings who was shot and paralyzed in a drive-by shooting on Nov. 10 in Jennings. The family includes Hoyt, his wife Ashley and their three young sons Anthony, 8, Aiden, 5, and one-year-old Victor. (Special to the American Press)

The brother of Jennings man who was shot and paralyzed in a drive-by shooting on his way to work, has launched a fundraiser to help the family while he recovers.

Hoyt Lejeune, 30, was shot driving to work  at Capital Manufacturing in Crowley on Thursday, Nov. 10 when he was shot inside his vehicle on La 26 near Plaquemine Street in Jennings. He suffered two gunshot wounds to the back and is paralyzed, according to his younger brother, Zachary Lejeune.

“You never know when your life will change,” Zachary Lejeune said. “For my brother’s family it was Nov. 10. He was on his way to work when this took place. We are thankful that he is alive and we are glad that we still have him with us today.”

One of the bullets lodged into his L7, nearly severing his spine and paralyzing him from the waist down, Zachary Lejeune said. The other bullet hit several of his organs causing major internal damage to his lungs, spleen, pancreas, stomach, liver and colon.

He has undergone surgeries to repair organs and half of his pancreas has been removed.

“They are concerned that they might have to go back in and work on some of the organs that have been severely damaged, like his pancreas,” Zachary Lejeune said.

Zachary Lejeune said his brother is a hard worker, who loves fishing and spending time with his sons and does not give up.

“My brother has a long road to recovery,” he said. “The family is hopeful in that he will survive, but we know that we need help from our community and friends while he is in recovery.”

“With him being unable to provide right now, this GoFundMe will help his wife and children not lose their home,” he continued. “They almost lost a husband and father. They do not need to lose their home which they just purchased within the last six months.”

Zachary Lejeune set up a “Hope for Hoyt” GoFundMe page – https://gf.me/v/c/4g9/hope-for-hoyt  with the goal of raising $11,000 to help Hoyt’s family which includes his wife, Ashley and three young sons, Anthony, 8, Aiden, 5, and one-year-old Victor. Food and monetary donations are also being accepted to help the family.

Zachary Lejeune is thankful to those who have helped the family so far.

“God bless you for contributing,” he said. “Thank you so much for your donations, thoughts and prayers. All of your donations will help this family in such a great way that there are no words that could measure the amount of gratefulness we feel.”

Suspect Wayne Wyble, 30, of Jennings was arrested for attempted first-degree murder and aggravated flight from an officer in connection with the shooting. He remains in the Jeff Davis Parish Jail on a $225,000 bond.