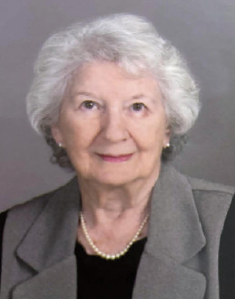 Bobbye Jean Collins Nunez, born on April 21, 1932, left this realm on Nov. 14, 2022.
She goes ahead of the love of her life, Lee Robert Nunez Jr.; her daughters, Vickie Lee Nunez Guilliot, Cynthia Ann Nunez, their spouses, Albert J. Guilliot and Michael D. Westering; and her five adored grandchildren, David Lee Savoie and his wife Rebecca Williams Savoie, Andre Thomas Savoie and his wife Julie Duval Savoie, Alexa Gabrielle Guilliot, Chloe Angelique Olivier, and Clelie Genevieve Olivier; and her two precious great-grandchildren, Taryn Duval-Savoie and John Foster Savoie.
Bobbye Jean was preceded in death by her parents, Foster and Ruby Collins; and her brother, Billy; her mother and father-in-law, Lee Sr. and Emma Nunez; her brother-in-law, Tommy Nunez; and her great-grandson, Henry Charles Savoie.
She was a proud graduate of Marthaville High School and Northwestern State University. Her Home Economics teaching degree led her not to the test kitchens of the north, as her professors advised, instead to educate the youth of Cameron Parish.
Countless students profited from not only the lessons required in the classroom but from the life lessons she taught by merely being herself.
The love story of Lee and Bobbye spans over six decades, begun with a school picture sent by student Tommy Nunez to his brother serving in the Navy in Korea, with the admonition, “if you don’t marry her, I will…..”.
Three months following the introduction by Lee’s brothers, Garner and Tommy, the couple were married. These soulmates evolved into wonderful parents and grandparents, travel partners and lovers of life.
“Bobcat,” as nicknamed by her father, fiercely loved and cared for her family, cooking, sewing and guiding their paths to adulthood with wisdom, faith, and boundless energy.
The family will welcome the public for visitation at J. E. Hixson & Sons Funeral Home of Lake Charles Wednesday, Nov. 16, 2022, from 3 p.m. until 9 p.m. Visitation will resume the following day Thursday, Nov. 17, 2022, at 9 a.m. until time of a celebration of life service led by Kris Howerton & Hixson celebrant Jody Barrilleaux at 10 a.m. Interment will follow at Grandlake-Sweetlake Cemetery.
Fond memories and expressions of sympathy may be shared at www.JEHixson.com for the Nunez family.