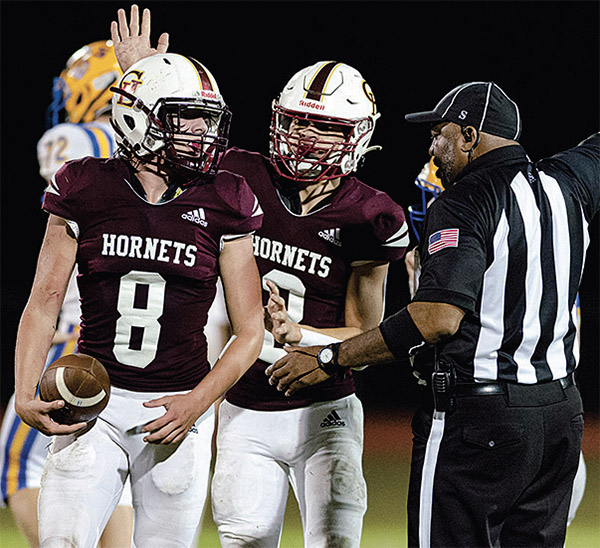 “We had some great runs by (Brent) Hardesty,” Grand Lake head coach Jeff Wainwright said. “Taylor had an unbelievable night.

“We could write a whole article on his night. It is how we play football. It is a team effort every time, and they step up. I love this team. No one said this team would win a game in these playoffs this year, and the moving up was going to throw us back years. What it did was it advanced us.”

The Hornets trailed 14-7 4 seconds into the second quarter after LaSalle quarterback Kendryk Morrow scored on a 2-yard keeper. But on the ensuing kickoff Taylor worked his way from left to right and found open field for a 65-yard return to tie the score.

Almost 3 minutes later, Hardesty scored the go-ahead touchdown on a 70-yard run after another long score was called back on a block in the back penalty two plays earlier.

Taylor added an 80-yard pick-six with 6:45 left in the third quarter to put the Hornets up 34-14 after tipping a Tigers a pass to himself.

No. 14 Grand Lake (9-2) won its fourth consecutive playoff opener under Wainwright and will travel to No. 3 Mangham (8-1) next week in the regional round.

With the lead, the Hornets defense settled in and allowed one score on the Tigers’ final five possessions and forced a pair of turnovers. Ezra Fontenot recovered a fumble that led to quarterback Connor Guillotte’s second touchdown with 43 seconds left in the first half.

“Looking at their offense, they a lot of things that they do that we are not accustomed to with what they do with the shotgun and two backs,” Wainwright said of the Tigers. “We haven’t seen that this year, and they did an excellent job at the beginning of the game.

“I thought our defense and coaching staff adjusting to the speed of it was the difference in the game. The defense made some stops so the offense could put some points on the board. Our defense made the adjustments midway through the second quarter that gave us a chance with the interception and fumble recovery. We were able to put this game away.”

Grand Lake gained all 322 of its yards on the ground led by 100-yard rushers Ian Vigo and Hardesty. Vigo had 105 yards and a score on 21 carries, and Hardesty added 109 yards on five touches.

“We bogged down coming out of halftime,” Wainwright said. “They had a good play on us on fourth down. Those things happen.

“Obviously we have to establish our run game for us to be successful, and tonight we were successful.”

Tanner Gagne led LaSalle with 110 yards on 13 carries, and Clay Clark finished with 96 yards and a touchdown on 15 carries.