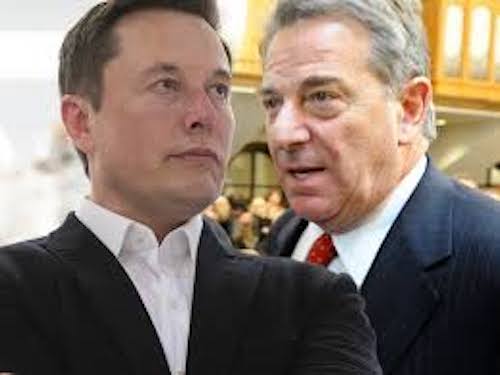 Elon Musk, left, used Twitter to spread a conspiracy about the attack on Paul Pelosi, right, but removed it later.(photo courtesy of tmz.com)

The voters of Lake Charles, Lafayette, and every place in between are represented by the most shockingly crude and unacceptable congressman ever to hold office in the 7th and 3rd Congressional Districts.

Republican U.S. Rep. Clay Higgins of Lafayette hit a new low when he mocked Paul Pelosi, 82,  the husband of Democratic House Speaker Nancy Pelosi, who was attacked in his home by an armed intruder.

A Higgins tweet has since been removed, but here is what he wrote above a picture of Nancy Pelosi holding her hands over her face: “That moment you realize the nudist hippie prostitute LSD guy was the reason your husband didn’t make it to your fund-raiser.”

Paul Pelosi was attacked Friday morning by a suspect wielding a hammer who had broken into the Pelosi home. David DePape, 42, faces charges of attempted homicide, assault with a deadly weapon, elder abuse, burglary, and other felonies. He was arrested carrying zip ties, duct tape and hammers, according to CNN.

Scalise has been critical of Pelosi and Democratic policies, but the newspaper said he tweeted within hours of the attack: “Let’s be clear: violence has no place in this country. I’m praying for Paul Pelosi’s full recovery.”

U.S. Sen. Bill Cassidy, R-Baton Rouge, Louisiana’s senior senator, said, “Political violence is particularly to be condemned as this threatens not just the individual, but our ability to solve differences through the political process.”

U.S. Sen. John Kennedy, R-Madisonville, tweeted that he and his wife were praying for the Pelosi family and thankful that Paul Pelosi is expected to recover. “Violence is unacceptable.”

U.S. Rep. Troy Carter, D-New Orleans, said, “Words matter, and the words of leaders can have enormous consequences. We all have to work together for a better America, and hatred and mockery have no business coming from a federally elected official. An apology is absolutely necessary.”

Carter is correct, of course, but don’t bet any money Pelosi is going to get it from Higgins. Most of Louisiana’s congressional delegation refused to specifically address the tweet by Higgins.

Lafayette Republican Holden Hoggatt, one of Higgins’ chief opponents, offered a good explanation of why he is running.

“As a prosecutor, I fight crime,” Hoggatt said. “Clay Higgins encouraged it. This kind of behavior is exactly why I am running against Clay Higgins. I refuse to believe that this is what the good people of South Louisiana want from someone who represents them.”

Voters in South Louisiana have proved Hoggatt is right because they have elected some productive, respectable members of Congress over many years. Higgins is a “flash in the pan,” which is described as “a showy beginning followed by a disappointing failure.”

Unfortunately, the sick political climate in which we live produced more of the wild conspiracy theories that have become much too numerous. The Hill, The Washington Post, and other national media reported Sunday night that a number of right-wingers are sowing doubt, passing along misinformation, and saying there are a lot of “unanswered questions” surrounding the attack.

Roger Stone, a longtime advisor to former President Donald Trump, wrote on one app that a “stench” surrounds the “alleged attack” on Pelosi, according to the Post.

Elon  Musk, the new owner of Twitter, responded to a Hillary Clinton tweet with a link to a right-wing website that questioned the circumstances of the attack, tweeting, “There is a tiny possibility there might be more to this story than meets the eye.”

The attack is just what the media said it was, a vicious attack in the Pelosi home by a deranged man demanding to know where “Nancy” was. He was prepared to “break her kneecaps.” DePape may have gotten the idea for his attack from what the Capitol rioters kept saying during their Jan. 6, 2021, insurrection — “Where’s Nancy?”

Even though Louisiana’s Republican congressmen refuse to condemn Higgins, the voters can do it during the midterms on Nov. 8. Those who live in the 3rd Congressional District deserve better and that includes Republicans who know many in their party who can do it so much better than Higgins.