Broncos take the hard road, then keep it simple 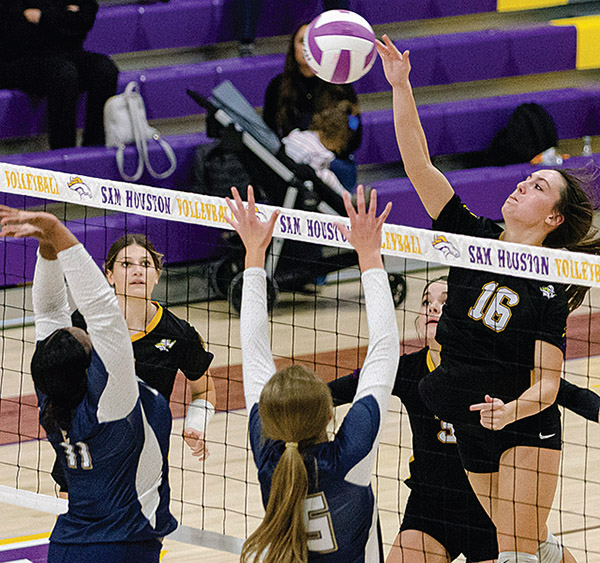 MOSS BLUFF — The Sam Houston Broncos went back to the basics and overcame losing the first set the beat Covington 3-1 in the opening round of the high school volleyball Class 5A state playoffs.

Against Covington (23-14), the Broncos were their own worst enemy in the first set when they committed errors and made things too difficult.

“When they had 18 (points), we had given them 18,” Sam Houston head coach Rene Fontenot said. “We cut down on errors moving forward.”

Fontenot said the Broncos were overthinking things on offense early in the match.

“They’ve got it in their minds that they wanted to do some different plays, some of them more complicated, and I think that works against us,” Fontenot said. “It is almost like we get fixated on it and when it doesn’t work, we get frustrated. They settled back down and went back to what works, just running the basics.”

Fontenot said her team has made big strides over the course of the regular season.

“This group has come a long way,” she said. “They get along well. They are very positive. We’ve done a lot of prayer and visualization besides the training. It is a very connected group.”

Ava Henry led the Broncos with 12 kills and 10 blocks. Addison Melendy added eight kills and 12 digs. Anna Claire Norris had 10 digs and six aces, including three straight during a 10-3 Broncos run to close out the match.

Julia Jenkins led Covington with four kills and six blocks, including two kills and a block during a 9-3 Lions run to end the first set.

Caroline Frederick also had four kills for the Lions.

The Broncos will face a district opponent in the regional round. Southside beat Sam Houston in a five-set match in the regular season, while the Broncos beat New Iberia in straight sets.