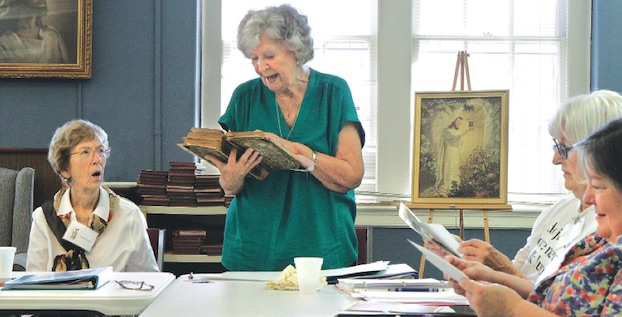 Missy Shaddock talks about “The Best Book I Ever Read” at an October meeting of The Review Club at First United Methodist Church. (Donna Price / American Press)

Who doesn’t recall being assigned a book to read by a teacher, and then having to write a report on it — with possibly even the added torture of having to read that report in front of the entire class?

Once out of school, most people are quite content to leave those book report days behind. Not so the members of The Review Club. Area women in this soon-to-be 130-year-old club meet regularly to listen to one another’s “reports” on various topics. And they do it because they want to.

The Review Club is a study club of literature. Every spring, members choose a topic to explore. In the club’s first year in 1893, it was the Americas. Last year, it was China. This year it’s “The Best Book I Ever Read.”

Members are assigned a date to present their report on one of the books selected on the topic-of-the-year, or, as is the case this year, on their favorite book.

The Review Club is not a book club where a book is selected and then read by all members. When it’s not a member’s turn to present their report at a meeting, that member gets to sit back, eat cookies and enjoy listening to the presentation being given by someone else.

Which is not to say the Review Club is for slackers. Members like Sandi MacKnight will put their all into researching and presenting their material when it’s their turn.

“When I am preparing for my review, I am immersed in the book, the author, and research 24/7 for weeks. I live and breath the topic,” she said.

MacKnight said she especially enjoyed researching her pick of a favorite book this year: John Kennedy Toole’s “A Confederacy of Dunces,” which won the Pulitzer Prize for fiction in 1981.

“It is a hilarious book set in New Orleans. I enjoyed laughing again as I reread it. I learned that Toole partially based the character of Ignatius Jacques Reilly on a professor, Bob Byrne, whom he met at ULL in the 1960s,” she said.

Why do this? The club’s objective is the same as it has been since its inception in 1893: The mutual improvement of its members.

Members meet at 3 p.m. on the first and third Mondays of every month (except during the summer) at First United Methodist Church on Broad Street.

They greet one another, say the Pledge of Allegiance as they have done at every meeting since 1963, and read the “collect,” a kind of prayer that began to be read at each meeting in the 1950s. The collect is this:

Keep us, O God, from pettiness; let us be large in thought, in word, in deed. Let us be done with fault-finding and leave off self-seeking. May we put away all pretenses and meet each other face to face, without self-pity and without prejudice. May we never be hasty in judgment and always generous. Let us take time for all things; make us to grow calm, serene, and gentle. Teach us to put into action our better impulses, straight forward and unafraid. Grant that we may realize it is the little things that create differences; that in the big things of life we are as one. And may we strive to touch and to know the great common human heart of us all. And, O Lord God, let us forget not to be kind.

Next there is a roll call. Then a treasurer’s report. It’s all very official. Review Club members are quite meticulous record keepers, and the club’s history is well-documented, and often outlines the members’ involvement in local affairs. In the mid 1930s, for example, the club joined the movement for the removal of house boats from the lake and contributed to “the rent of a place for a day nursery for underpriveledged children in Goosport.”

The club has also donated many books to area libraries.

Membership has always been limited to 30 members. Prospective members can attend a meeting to see if the club is a good fit for them. They must fill out an application to join. They are then voted on by secret ballot.

The club has met regularly except for a break during the Spanish Flu pandemic and, most recently, the COVID-19 pandemic.

At a recent October meeting, it was club member Missy Shaddock’s turn to present on her favorite book, “Godey’s Magazine and Lady’s Book,” edited by Sarah Hale. It turns out Shaddock’s book choice is even older than the Review Club itself: It’s the entire collection of the popular magazine’s content from the year 1858 bound in a hard-cover book. The treasured volume had been in her family for years when she was first
introduced to it at the age of 10.

“Godey’s Magazine and Lady’s Book” was an American women’s magazine published by Louis A. Godey from 1830–1878.

Magazine editor Sarah Hale used her role to influence various causes, such as to advocate for the education of women.

Shaddock chose not to go to the podium to present her report. She preferred to stand up at her seat to give her talk.

So she stood and read her report, handwritten on lined notebook paper. She passed around copies of pages from the fragile book so club members could get a better look.

Nervous or not, Shaddock quickly gained her footing, and had the crowd laughing while they learned all about “Godey’s.”

“They were interested in goldfish back then,” she said, referencing ways to keep them alive in the magazine.

More upcoming “Best Book I Ever Read” reports include reports on “The Hiding Place” by Corrie ten Boom, “A Tree Grows in Brooklyn,” by Betty Smith, “Steve Jobs,” by Walter Isaacson and “Anam Cara,” by John O’Donohue.