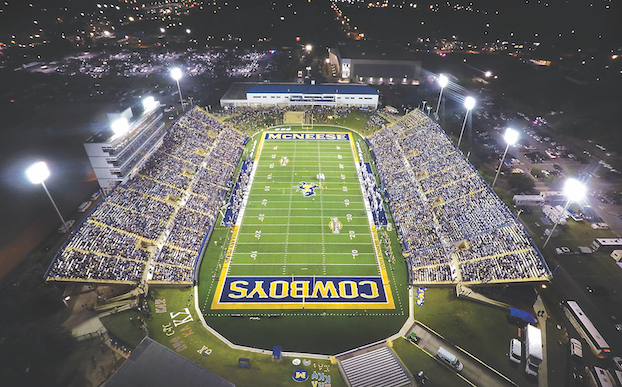 Three McNeese State football players were kicked off the team Tuesday for their part in an alleged robbery, the American Press has learned.

All three are defensive backs, including starter Ke’Shon Murray. The other two are reserves, Jaylen Jackson and Johnquai Lewis.

While first-year Cowboys head coach Gary Goff would not go into details, however he did call the incident “extremely disappointing.”

“We had three young men make a very poor decision in what I believe was the heat of the moment,” Goff said. “We cannot stand for that. They have been removed from the team.

The loss of the three defensive backs comes two weeks after the Cowboys lost a pair of cornerbacks to injury, making them even thinner in the secondary.

McNeese is off this weekend after starting the season 1-4.

The incident was the second in two years in which three players were dismissed from the McNeese team after getting into trouble with the law.

Goff, who has spent the first few months not only trying to rebuild the Cowboys on the field but also change the program’s culture, says he has a zero-tolerance policy in place.

“We will not stray from our standards,” Goff said. “We are going to build this thing the right way and make Lake Charles proud of what we are doing.

“This is not something I like doing but I will do it if I have to.”

Both Murray and Jackson played in all five games season. Murray (5-10, 170), a junior from Fort Myers, Florida, who transferred from Sam Houston State, made nine tackles and recovered a fumble. Jackson (6-0, 200), a junior from Brunswick, Georgia, who played for Goff at Valdosta State after initially signing with Georgia Tech out of high school, had 13 tackles. Both broke up one pass.