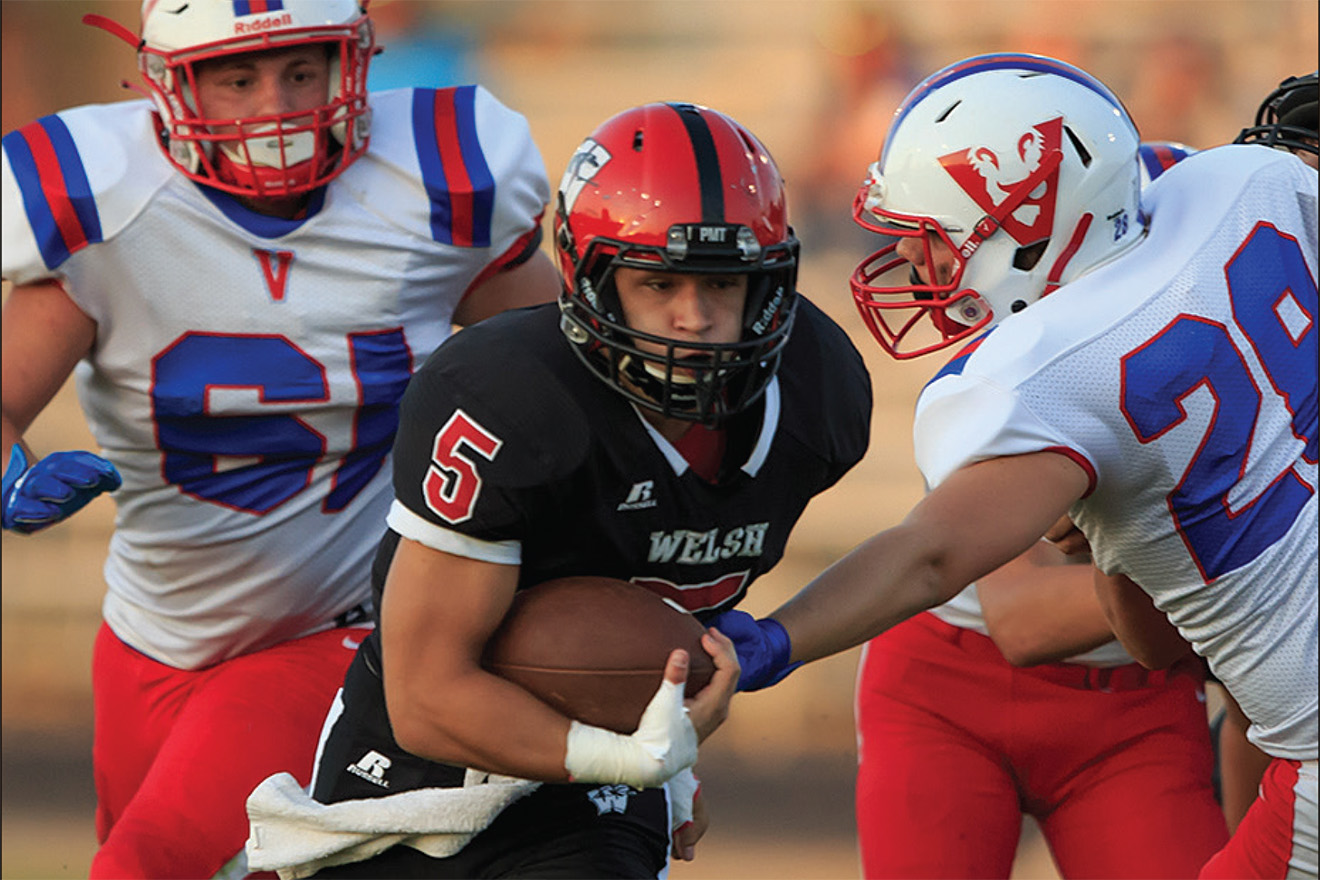 The Greyhounds’ Kennon LeGros runs past Vinton’s Reese Borel on Sept. 10, 2021, at Welsh High School . LeGros ran for 129 yards and a touchdown. (Kirk Meche / Special to the American Press)

WELSH – After spending a year in a supporting role, Kennon LeGros has taken full advantage of his chance to be a star, rushing for 642 yards and 11 touchdowns in four games to help the Welsh Greyhounds to an undefeated start to the high school football season.

The Greyhounds open District 5-2A play Thursday night by visiting the area’s only other unbeaten team, Grand Lake.

This season, LeGros has run for more than 100 yards and scored a touchdown in all four games, with a best of 213 yards in a win over Class 3A Westlake.

“I love it,” LeGros said of being the featured back. “It wasn’t my role last year and I accepted that, but now I am embracing it and doing everything I can every time I get the ball.”

Spectacular jukes and jives aren’t a part of LeGros’ game.

“I’ll fight for yards and make a move in space every now and then,” he said. “I’ll do anything I can to get as many yards as I can.”

LeGros spent his first two years in middle school playing defense before finding his calling at running back.

“In eighth grade they moved me to running back and that’s when it took off for me,” he said. “I tried it and loved it right away and it stuck with me. I knew it was the position for me and what I was good at.”

LeGros said it was always his dream position, having grown up watching cousin Charlie Watkins play on Welsh’s teams that reached the state championship game in the 2017 and ’18 seasons.

“I went to all of the games in elementary and middle school and always looked up to him,” LeGros said. “That’s why I wanted to play running back. He was a hard hitter and made plays when the team needed them.”

LeGros tries to set an example for the younger players on the team.

After his playing days are done, LeGros might be found on the sidelines one day.

“I’ve thought about going into coaching,” he said. “I think I would enjoy teaching kids how the game works, how to come together and how to win and have fun.”

“He is the epitome of Welsh football,” Gueringer said. “He is physically and mentally tough. He does what he is supposed to every single day and works his tail off. He loves the game. He’s never let anything in his life bring him down or used it as an excuse, only used it as a positive, which is what Welsh football is all about.”

Gueringer said LeGros shines on and off the field.

“If you tell him one time what he needs to do or how to fix something, he is going to do it,” Gueringer said. “He understands the entire offense and the game. He wants to be great. He doesn’t talk about it or post about it, he wants to prove it. He loves the game and also understands the process of being a good person.”