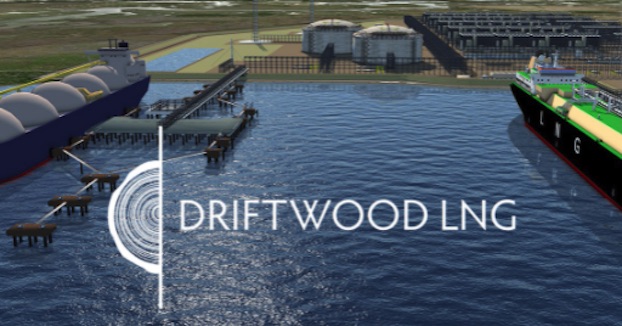 Driftwood LNG, owned by Tellurian Inc., is developing a liquefied natural gas (LNG) production and export terminal on the west bank of the Calcasieu River, south of Lake Charles. (Special to the American Press)

Tellurian, the company building the Driftwood LNG plant in Carlyss, lost two of its biggest potential customers after it withdrew a $1 billion high-yield bond sale earlier this week.

Joi Lecznar, a spokesperson for the Houston-based company, said the change in the market made the debt of the bond sale too expensive and the withdrawal has nothing to do with contracts canceled with Shell and Vitol. That leaves Teullurian with only Gunvor as a signed potential customer for Driftwood production.

“The counterparties wanted to renegotiate and we preferred not to,” Lecznar said. Construction of the four liquefaction train plant here in Southwest Louisiana is ongoing.

“This might shift our delivery schedule slightly,” Lecznar said.

Originally, the schedule for delivery was by 2026.

There is a huge global demand for LNG and about 100 million tonnes of LNG in the U.S. that is permitted but not financed, according to Lecznar.

“We are focused on financing Driftwood and we have prioritized securing equity partners who need additional LNG in their global portfolios,” she said. “Tellurian has a strong business model in that we have natural gas production that produces revenue as we sell domestically. In addition, once Driftwood is operational, we will have LNG that we can sell at global market prices, providing optional shareholder value.”

To date, Tellurian has made $2.5 million in contributions  to Southwest Louisiana, according to Lecznar.

“One of the first projects resulting from Tellurian’s five  year $25 million investment in the National Forest Foundation reforestation is to plant 300,000 trees in Kisatchie Forest, which was heavily damaged in previous years’ hurricanes. We have invested nearly $1 billion dollars towards Driftwood LNG,” said Lecznar