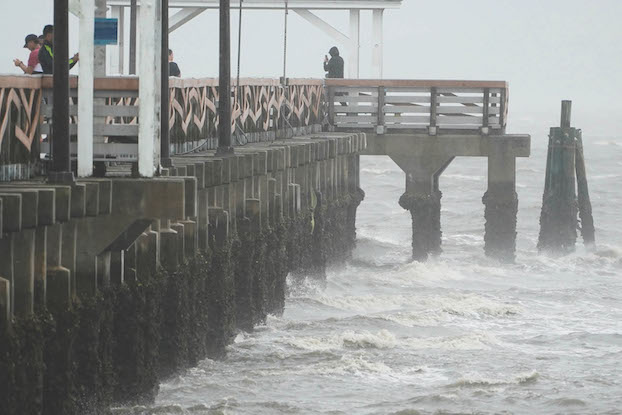 Waves crash along the Ballast Point Pier ahead of Hurricane Ian on Wednesday in Tampa, Fla. (Associated Press)

FORT MYERS, Fla. — With the death toll from Hurricane Ian rising and hundreds of thousands of people without power in Florida and the Carolinas, U.S. officials vowed Sunday to unleash a massive amount of federal disaster aid as crews scrambled to rescue people stranded by the storm.

Days after Ian tore through central Florida, carving a deadly path of destruction into the Carolinas, water levels continued rising in some flooded areas, inundating homes and streets that were passable just a day or two earlier.

With branches strewn across the grounds of St. Hillary’s Episcopal Church in Ft. Myers, the Rev. Charles Cannon recognized the immense loss during his Sunday sermon but also gave thanks for what remained. That included the church’s stained-glass windows and steeple.

Deanne Criswell, administrator of the Federal Emergency Management Agency, said the federal government was ready to help in a huge way, focusing first on victims in Florida, which took the brunt of one of the strongest storms to make landfall in the United States. President Joe Biden and first lady Jill Biden plan to visit the state on Wednesday.

Flooded roadways and washed-out bridges to barrier islands left many people isolated amid limited cellphone service and a lack of basic amenities such as water, electricity and the internet. And officials warned that the situation in many areas isn’t expected to improve for several days because all of the rain that fell has nowhere to go since waterways are overflowing.

About 750,000 homes and businesses in Florida were still without electricity Sunday, down from a peak of 2.6 million.

Criswell told “Fox News Sunday” that the federal government, including the Coast Guard and Department of Defense, had moved into position “the largest amount of search and rescue assets that I think we’ve ever put in place before.”

Still, recovery will take time, said Criswell, who visited the state Friday and Saturday to assess the damage and talk to survivors.

She cautioned that dangers remain.

“We worry a lot about the direct impacts from the storm itself as it is making landfall, but we see so many more injuries and sometimes more fatalities after the storm,” Criswell said. “People need to stay vigilant right now. Standing water brings with it all kinds of hazards — it has debris, it could have power lines.”

At least 54 people have been confirmed dead: 47 in Florida, four in North Carolina and three in Cuba.

The weakened storm drifted north Sunday and was expected to dump rain on parts of Virginia, West Virginia, Maryland and southern Pennsylvania, according to the National Hurricane Center, which warned of the potential for flash-flooding.

More than 1,600 people have been rescued statewide, according to Florida’s emergency management agency.

Ben Bertat found 4 inches of water in his house by Lake Harney after kayaking there.

“I think it’s going to get worse because all of this water has to get to the lake” said Bertat, pointing to the water flooding a nearby road. “With ground saturation, all this swamp is full and it just can’t take any more water. It doesn’t look like it’s getting any lower.”

Gabriel Madling kayaked through several feet of water on his street, delivering sandbags to stave off water that had crept to his doorstep.

“My home is close to underwater,” Madling said. “Right now, I’m just going to sandbag as much as I can and hope and pray.”