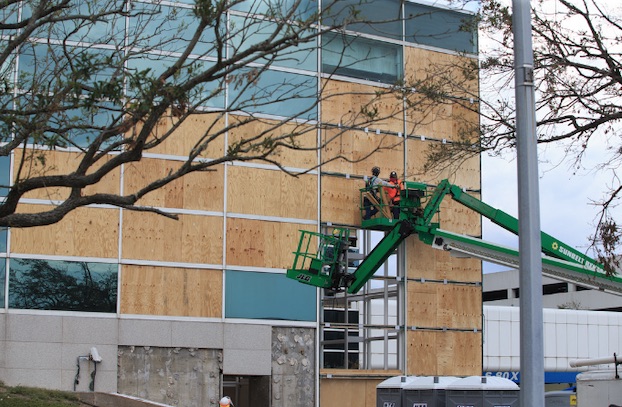 Workers begin the daunting task of boarding up damaged windows at the Capital One Towner on Sept. 9, 2020 — two weeks after Hurricane Laura passed through Southwest Louisiana. Those plywood boards are now compromised and could be dislodged and become flying projectile, according to Doug Burguieres, director of Lake Charles planning and development. (Kirk Meche / American Press Archives)

A new date has been scheduled for the jury trial involving California-based Hertz Investment Group and its insurance company Zurich American after Zurich requested and was granted a continuance.

Hertz is the owner of the building often referred to as the Capital One Tower, even though that bank closed its offices there in June 2017.

Work that began this summer will not be interrupted or put on hold, according to a spokesperson for the company.  Hertz received $57 million from its insurance company after the building was damaged by 2020 hurricanes.

That figure reflects the building’s pre-storm value, according to a recent report from The Advocate.

At first, Hertz  estimated that repairs would cost $150 million. Now Hertz said it will need $165 as market conditions have changed.

At the June 15 Lake Charles City Council meeting this year, Martha Curtis, lead counsel for Hertz, said the company filed suit against Zurich/American Guarantee and Liability Insurance December 23, 2020. On May 20, 2022, Judge Robert Wyatt, 14th Judicial Court, ruled that Hertz was entitled to a jury trial and the date was set.