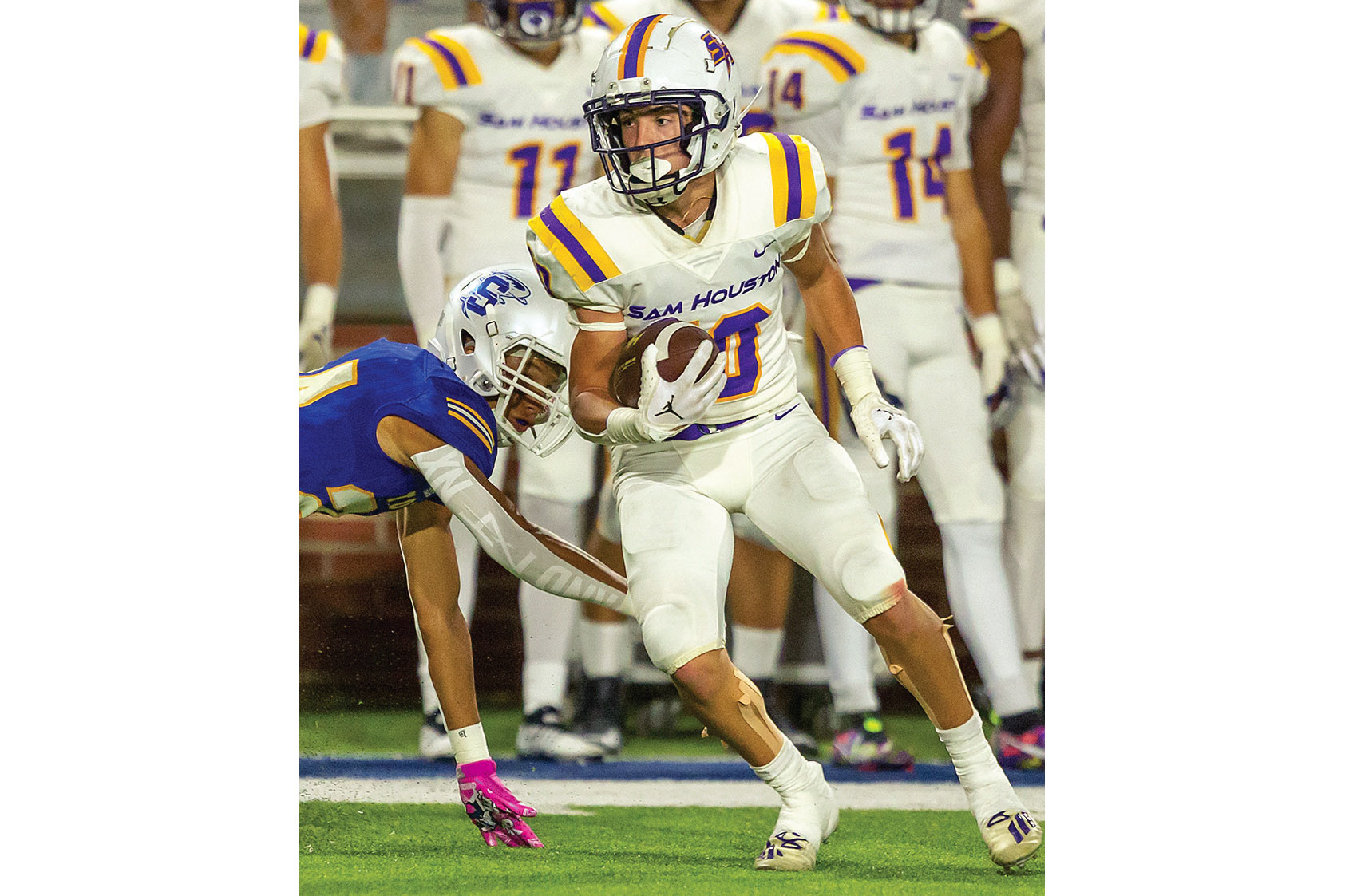 Sam Houston’s Drew Dronet turns back inside to avoid the tackle of the Tors’ Slade Shove-Knox as he runs to the end zone Friday night at Matt Walker Stadium in Sulphur. (Kirk Meche / Special to the American Press)

“It is something that we talk about all the time — it is not living in the past,” Sam Houston head coach Chad Davis said. “We had something bad happen to us, and if we keep staying in the past we are going to keep making mistakes.

“The kids moved forward. They forgot about it and kept fighting.”

Sophomore quarterback Gavin Stouts’ first pass was returned 41-yard for a pick-six by Tors linebacker Corey Hyatt. But Stout regrouped and threw for 337 yards and four touchdowns on 18-of-27 passing to extend the Broncos’ (3-2, 3-1 District 3-5A) win streak to three.

“The kid played extremely well,” Davis said of Stout. “We stuck with the game plan and he threw some unbelievable balls.”

Drew Dronet caught seven passes for 152 yards and a score, and Jaxon Landreneau had two touchdown receptions for 75 yards. Landreneau’s last four receptions have been touchdowns.

Sam Houston was down 27-13 midway through the third quarter and turned the game around by scoring on three of its final four possessions.

“We put up a lot of yardage,” Davis said. “We shot ourselves in the foot in the red zone a few times.

“What we had to tell the kids at halftime was everything is working, but we have to take advantage of it and punch it in.”

It started with a 47-yard score from Stout to Landreneau with 5:13 left in the third quarter. Then Jamorion Jackson recovered a fumble that led to a 2-yard touchdown run by Dennis Gardere to cut the Tors’ lead to 27-25 less than 3 minutes later.

“I like the way they played and executed and did what they needed to do,” Sulphur head coach Chris Towery said. “We just have to sustain it for the second half.

Sulphur got a big special teams play when Peyton Lemaire blocked a 21-yard field goal attempt after the Broncos reached the Tors’ 3-yard line with 3:33 left in the first quarter.

The offense got its chance and went on a 14-play, 80-yard drive with quarterback Gage Trahan punching it in from 1-yard out for a 14-0 lead 3 minutes into the second quarter.