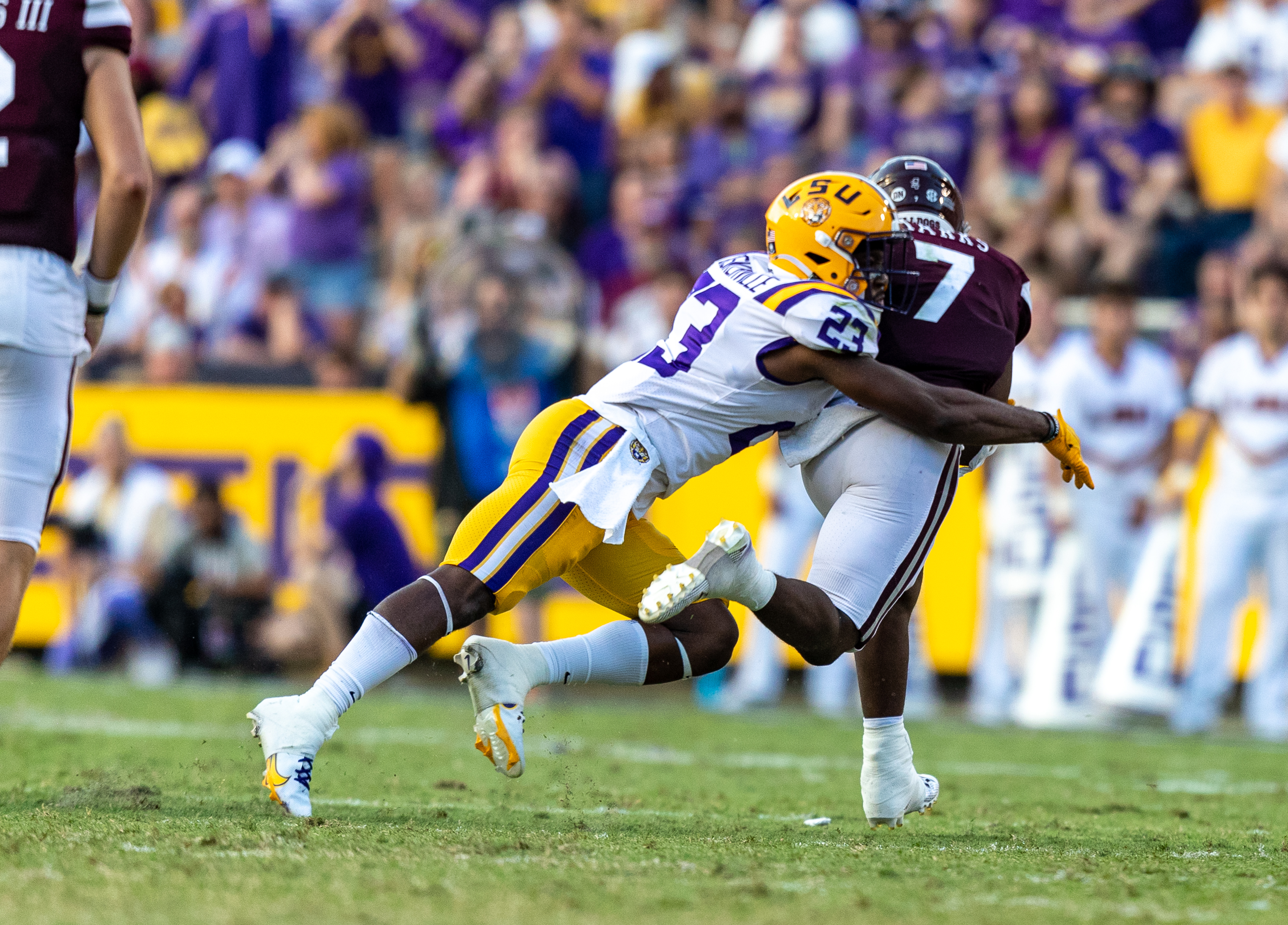 LSU Tigers linebacker Micah Baskerville (23) tackles Mississippi State Bulldogs running back Jo'quavious Marks (7) behind the line of scimmage during a SEC match up at Tiger Stadium in Baton Rouge, Louisiana on Saturday, September17, 2022. (Dennis Babineaux/Special to the American Press)

Another week, another box to check in Brian Kelly’s grand adventure as first-year LSU head coach.

The veteran coach’s first true road game with LSU will coincide with his first conference road trip with the Tigers as he ventures to one of the Southeastern Conference’s wildest venues to play Auburn tonight.

It will be the third SEC stadium he’s coached in his 33-year career, all of it previous to this year spent in the Midwest.

The most recent was when he took Notre Dame to Georgia in 2019 for a down-to-the wire game won 23-17 by the Bulldogs.

“It didn’t finish the way I wanted it to,” he recalled, but “The Georgia atmosphere was terrific.”

The other toe-tap into SEC country came when he was the head coach at Central Michigan and took his team to Kentucky in 2006.

“Kentucky’s program wasn’t where it is now with coach (Mark) Stoops,” he said of the 45-36 loss his Chippewas took. “But when you’re at Central Michigan and you’re playing in an SEC environment, it’s all big at that point.”

His LSU SEC road introduction will be at one of the conference’s rowdiest pit stops with two teams that tend to play strange games, be it earthquakes in Baton Rouge or Barn Burners in the self-styled Loveliest Village on the Plains or others from the odd-ball laundry list.

Whether Kelly knows the weird history between the two, he didn’t say.

“I just know routines will stay the same other than we’re going to get on an airplane,” he said of going on the road. “But we’ll be in a stadium that will be pro-Auburn. The first month of the season it was pro-LSU for the most part. So now the big enemy is distractions and so we’ll have to do a great job of making sure our team is focused and locked in on what’s important.”

This is a rare year when neither team comes in ranked, with LSU and its rebuildling program taking on an Auburn team that, by all accounts, may soon be in the market for a coach to replace Bryan Harsin.

Harsin might not recover from a 41-12 shellacking in front of the Auburn home crowd against Penn State.

LSU has made some strides since opening the Kelly Era with an ugly loss to Florida State with three consecutive wins.

“We’ve been able to make progress necessary to have a modest winning streak,” Kelly said. “And it is modest. We’ve got a lot of work ahead of us.”

It’s the start of streak of games that will also include Tennessee, Florida, Ole Miss before the annual open date before Alabama.

“This next month will tell us a lot,” Kelly said. “Will challenge us to a new level.”

Kelly’s analysis: “It’s a team that will fight but we’re thin in some areas. We’ve got to stay away from injuries and things of that nature. But there’s no doubt about the fight. These guys will fight you for all the right reasons.”