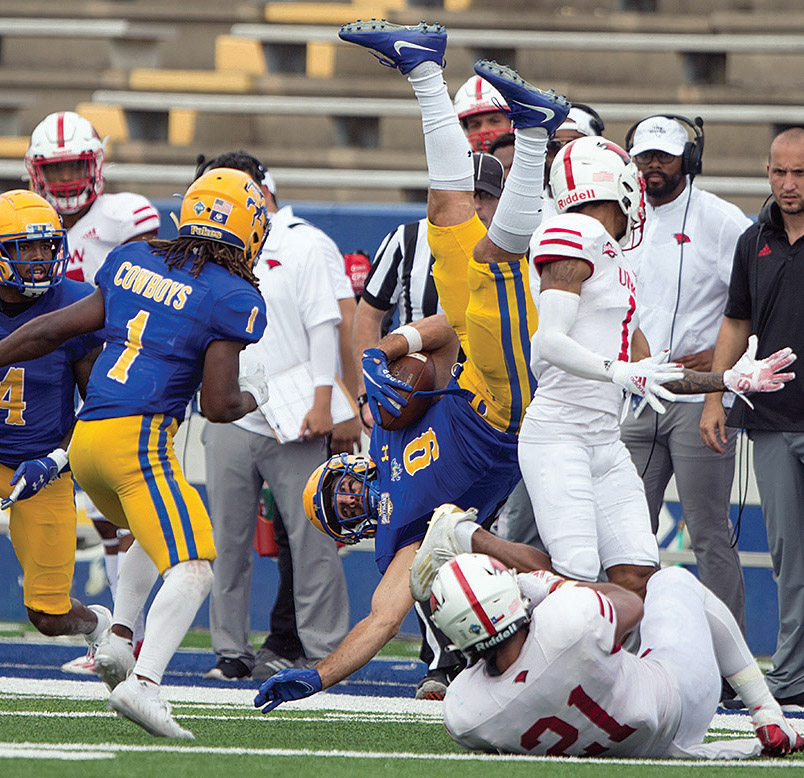 The McNeese State-Incarnate Word series has evloved into an intense rivalry with the Cardinals owning the advantage in recent seasons. (Kirk Meche / Special to the American Press)

When it comes to the rivalry between Incarnate Word and McNeese State, it wasn’t that long ago the spikes were on the other shoes.

In the fall of 2017 the Cowboys put a whooping on UIW in a 55-7 victory. McNeese scored the final 55 points in that game after giving up an early touchdown.

At the time the Cowboys owned a 4-0 record against the Cardinals. The Cowboys were clearly the hunted.

Not now as the series is 5-3 McNeese’s favor.

UIW is currently the Southland Conference’s top dog as defending champ and is ranked as high as 11th in the nation in one poll.

“Incarnate Word is a very talented team. obviously. They won the conference a year ago,” McNeese head coach Gary Goff said. “They are a talented and experienced team.”

UIW is 3-1 but 0-1 in the conference, losing its league opener to Southeastern Louisiana last week on the game’s final play.

They are what Goff hopes McNeese can become.

But the programs have an interesting recent history.

A rivalry began on Feb. 27, 2020 when McNeese was celebrating a game six months to the day after Hurricane Laura hit town.

The Cardinals not only ruined the feel-good story with 48-20 win but also added spice to the game by throwing for a late score with 33 seconds left instead of merely taking a knee.

The coaches exchanged words during the handshake. Then, after another UIW thumping in the first meeting last fall, the Cowboys pulled off the upset later in the season to hand the Cards their lone conference loss.

While all coaches from those games are gone, some still remember.

“There was a lot of talk during the game,” McNeese linebacker Micah Davey recalls. “It was intense.”

Even off the field the schools were linked as both considered moving from the Southland to the Western Athletic Conference.

Early in the process McNeese decided not to make a change. UIW waited until the last minute. That adds to the drama.

Goff said he isn’t worried about any of that. His concerns begin and end with the Cowboys.

“I’m worried about the Cowboys and how we play,” Goff said. “Incarnate Word happens to be our opponent this week. We just have to continue to work and get better.”

The Cowboys are coming off their first win of the season and hoping to build on that.

“Excited the guys are still coming to the office every day with a great attitude,” Goff said. “We got a lot of season ahead of us. We have to continue to work hard and we have a lot of success ahead of us.”

NOTES: After practice Wednesday, McNeese named Kordell Williams its fifth T.A.D. recipient of the season for his toughness, attitude and discipline. The honor goes to team leaders and is awarded by the coaching staff.