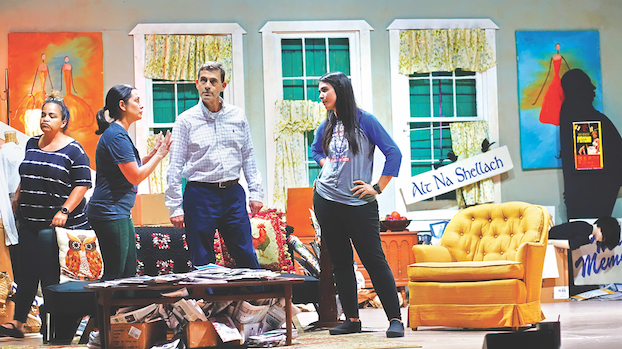 “Alfred Hitchcock Taught Me Everything I Know” by Pat Cook leads off an exciting month of murder, mayhem and mystery at the Strand Theatre.

A Block off Broadway community theatre group returns to the stage for the comedy, mystery performance set for 7 p.m. Oct. 1 and Oct. 8 and 2 p.m. Oct. 2 and 9 at the Strand Theatre, 432 N. Main St., in Jennings.

“This is a fun, playful comedy influenced by Alfred Hitchcock and the classic Clue board game,” Director Glenetta Shuey said. “It’s one of those that has a lot of quick dialogue and a lot of physical comedy. It will be a lot of fun for everyone with a laugh a minute.”

“I think people will like it a lot because, like Clue, it has mystery and will keep everyone on their toes wondering what is going to happen next.”

The play focuses on Maura Milton, who applies for a bookkeeper’s job at the home of Tyrone Bartholomew, who Shuey describes as an eccentric man who “acts his way through life.”

“He’s an actor by trade, but you never know when he is acting or what he is doing is real,” she said.

Maura soon finds out there isn’t one Tyrone Bartholomew but many. The spry old actor relishes life and flies from one character to another whenever dealing with the outside world. But Maura wants to prove that she can stand on her own two feet. And in between dodging gangsters with guns and a wild-eyed lady with an ax, she starts to question her career choice.

It is only when the police arrive that she questions Tyrone – Can he distinguish what is real and what is not anymore? She fears he has lost all track of reality. Then his actor friends turn out to be more than they pretend to be. And suddenly, Tyrone seems the only sane one in the group.

The screwball comedy with a bit of mystery thrown in for good measure will keep audiences guessing until the last shot is fired, and the body hits the floor.

“This is a no-brainer,” she said. “You can give yourself a chance to enjoy a good laugh and get comic relief at the highest level.”

Preparations for the production have been underway for nearly two months with rehearsals by the cast, Shuey said.

“We have a good cast – some veterans returning to the stage, but there are some new faces,” she said.

Tickets are $12 and $10 for seniors 60 and older. Tickets are available in advance 4-6 p.m. Thursday and Friday at the Strand Theatre or at the door prior to each performance.