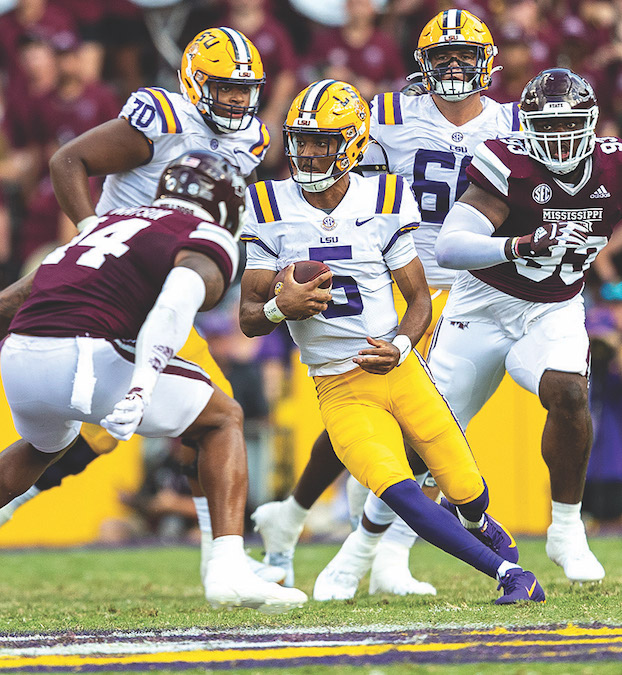 With a new offensive line and an ongoing learning process, LSU quarterback Jayden Daniels has been quick to pull the ball down and run for his life instead of reading through his passing progressions. But recently Daniels has shown signs of confidence and a willingness to stay in the pocket to look for LSU’s most dangerous weapons, the wide receivers. (Dennis Babineaux / Special to the American Press)

LSU knows that quarterback Jayden Daniels’ legs are a weapon.

The Arizona State transfer can flat-out run. Just watch him.

Fast, elusive, a bit of a jitterbug.

The question is, how often do the Tigers want him to take off?

There’s not a simple answer, more or less.

It probably wasn’t on Brian Kelly preseason wish list that, four games into the season, Daniels would still be leading the Tigers in rushing with 262 yards —65.5 per game — even though in his case that figure subtracts 53 yards lost in sacks.

But here we are.

“You have to be careful,” Kellys said, “when you say, ‘Hey, you’re running too much.’ Then when he needs to be dynamic he’s not.”

Kelly said he doesn’t want to slam the brakes on the elusive Daniels. Maybe tap the brakes occasionally.

Few of Daniels’ runs were planned. The vast majority were scrambles he had to improvise.

That’s not the worst thing, either, Kelly said.

“When we evaluate when he runs we want to see that it was within the progression (of the reads),” Kelly said. “Was it really good coverage? Or maybe that play wasn’t great against that coverage? Or we got beat at a particular position and he got flushed?”

“Sometimes they’re really dynamic runs where there was just nothing there and he made something happen.”

On the opposite end …

“Did you turn down a potential high-low read and just take off? It’s really a little bit of both.”

Plus, it’s no secret that the wide receivers are the strength of the LSU team.

There’s a learning curve. Daniels was a three-year starter at Arizona State, but that wasn’t LSU’s offense.

“Much more of a pro-style offense,” Kelly said. “This was a totally different offensive structure for him, so he’s just becoming more comfortable with the offense itself.”

It helps, Kelly said, that Daniels is one of the most coachable players he’s been around. He not only accepts it, he embraces it and seeks it out.

In two of the four games, LSU led early and poured it on late. Daniels didn’t really need to run.

Not much change, really, but Kelly likes the progress he detects.

“Decisiveness is starting to be part of the vocabulary instead of being hesitant,” Kelly said. “That comes with knowledge of the offense. The other thing that has become a lot quicker is his setup.

“Quick feet but slowing down and not rushing through the progressions. When you’re decisive, the ball comes out quicker, and that’s what we’re seeing as he become a more decisive quarterback.”

One was a completion to Jaray Jenkins in the red zone.

“That was his fourth receiver through a progression,” Kelly said.

The other was a screen pass to Malik Nabors.

“See how quickly the ball comes out?” Kelly said. “Those are the kind of things you’re looking for in terms of development and we’re starting to see that.”