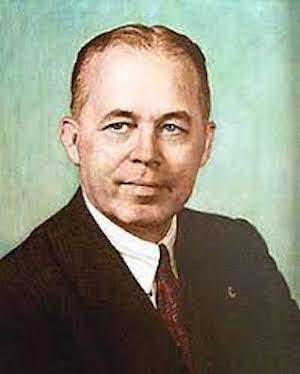 Sam H. Jones became the first elected Louisiana governor from Lake Charles. Jones was a reformer who came along when the state needed a stabilizing influence.en.wikipedia.org

The years 1939-41 were a tumultuous time in Louisiana politics. Richard W. Leche became the state’s first governor to go to prison. The Huey Long grip on politics ended, and Sam Jones of Lake Charles became the city’s first elected governor.

Long was assassinated in 1935 after being elected to the U.S. Senate in 1930. However, Long remained in state office until his state candidates took over in 1932. Oscar K. Allen, hand-picked by Long, won the 1932 election.

Leche won the 1936 election. Allen died in office in 1936 and James A. Noe served as governor for five months until Leche took office.

Leche and others eventually proved what Huey Long had said about those who followed him.

“With all the power I have given my leaders, they will all go to jail if something ever happens to me,” Long said.

Leche and others got into mail fraud trouble when they came up with a plan to defraud the Louisiana Highway Commission by purchasing trucks at an exorbitant price. They were charged with making illegal profits of over $111,370, and Leche was accused of taking $31,000 in kickbacks.

Something Leche said earlier would come back to haunt him: “When I took the oath of office, I didn’t take any vow of poverty.”

Leche resigned as governor on June 26, 1939. Although he apparently knew he was in serious legal trouble, you couldn’t tell it from what he said when he resigned.

In the immediate future, Leche said he would follow the advice of his doctors, even if it necessitated an operation, and, after regaining his health, he would farm at his Covington home and start practicing law.

“I never expect to hold any public office again,” he said. “I am not interested in a federal judgeship, and never have been interested in it. I do not expect to run for any office or to be appointed to any office.”

Paroled in 1945 after serving five years, Leche was pardoned by President Harry Truman in 1953. He was eventually readmitted to the Louisiana bar and returned to his legal practice in New Orleans.

As you would expect, the 1940 governor’s election would be what was called a “free-for-all.”

Jerry Doty, a lobbyist, and political analyst, in a 1990 story written for the American Press, said the front page of the newspaper on Sept. 15, 1939, carried three key headlines. One read, “German armies advance in Poland and France.” Another said, “Russia calls up one million men for army service.” And then there was the third: “Sam Jones announces for governor.”

Jones was born in Merryville in Beauregard Parish but was practicing law in Lake Charles when he entered the race.

Others in the campaign were James Noe, who had served five months as governor; Earl Long, Huey’s brother who became governor when Leche resigned; Henry Vincent Moseley of Opelousas; and James H. Morrison of Hammond.

Jones said, “The paramount issue in this race for governor is the restoration of honesty to public office.” And that is exactly what he brought to the office.

Jones took office on May 14 and was cheered by thousands during a parade in the capital city. In 1934, he had married the former Louise Gambrell Boyer, who had two children by a former marriage.

The American Press reported that Jimmy and Billy Boyer, Mrs. Jones’ sons, were far more anxious to ride on a motorcycle in the parade than in an automobile with the governor. Mrs. Jones had Bobby Jones, who was half asleep on her shoulder, and Jones carried his daughter Carolyn.

Thanks to Jones’ election, a tumultuous political time was over, at least for the time being.