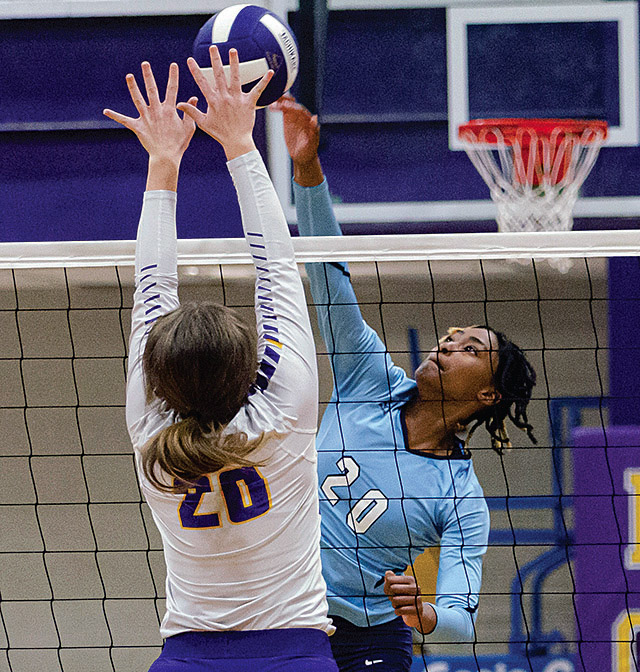 “(Williams) really set the tone,” Barbe head coach Katie Franks said. “She really came and finished the game for us.

“We can only get her involved when we pass well, so the first set we didn’t really pass well. Serve-receiver-wise and defensively, we picked it up in the second, third and fourth set, and we were able to get her the ball more.”

Williams, a three-sport star, finished with 18 kills and four blocks.

Barbe (7-10) won for the third time in five matches and avenged a five-set loss to the Yellow Jackets three weeks ago.

“We started off slow,” Franks said. “We lacked a little bit of confidence to start off, but I am proud of how we fought back, won the next three sets and finished the game off.

“We just have to continue to show these young ones what the game of volleyball is about, how to have confidence in ourselves and how to play to win and not to play to lose.”

Tied 22-22 in the second set, Williams’ back-to-back kills closed out the set in the Bucs’ favor. She had five kills in the third set, including a big one that tied the set at 27-27.

Williams scored the first three points of the fourth set on two blocks and a kill and the final point to close out the game.

Iowa (17-7) had mild success in slowing Williams in the final two sets but couldn’t come up with the lead in the fourth after falling behind 7-1.

“(Williams) is a great player,” first-year Iowa head coach Jenny D’Alessandro said. “She is hitting over the girls and hitting around them. I wouldn’t expect anything less of her.

“We started working with her hits and started to come in more and adjust to where she was hitting. I had my middles go over her shoulder to take the path of her hit.”

The loss ended a four-match win streak for the Yellow Jackets, but D’Alessandro said she likes how her team is playing.

“I really love how my girls are very aggressive,” she said. “We do need to work together a lot more, but I like the chemistry that we have. That is one of the best things that I love about this team.”

Ann Kat Barrett posted 18 digs for the Bucs, and Madilyn Areno had 18 assists.