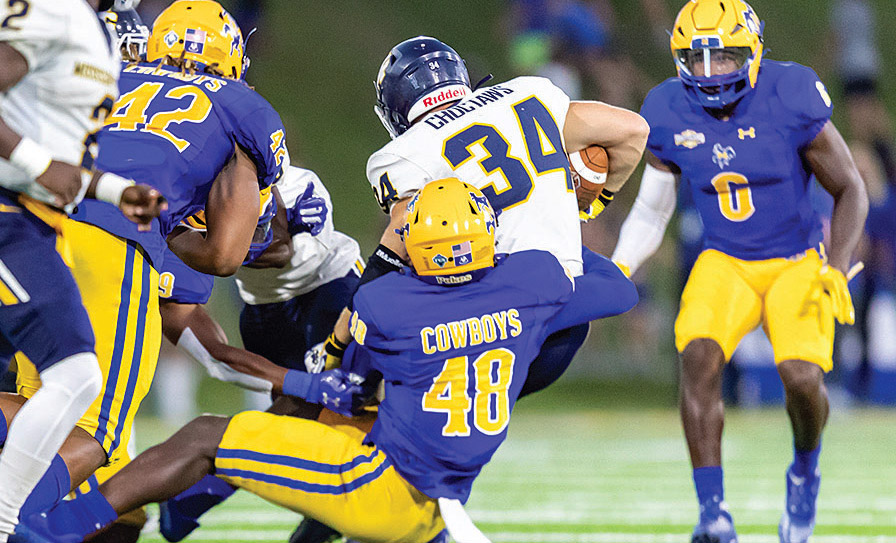 McNeese State redshirt freshman linebacker Micah Davey, No. 48, knew early he wanted to be the hammer and not the nail when following father Rohan’s football footsteps. (Dennis Babineaux / Special to the American Press)

Some lessons are passed down from your father the hard way.

Micah Davey learned from his dad’s pain and decided to take another path on the football field.

The sophomore linebacker for the Cowboys, who won’t turn 19 until Sunday, watched as his father played quarterback professionally. He saw his dad take his share of hits and decided it was better to give than receive.

“When he was playing once, I watched him get hit and crack three ribs,” Davey said. “I said right there I would rather be the one doing the hitting.”

Rohan Davey made a name for himself as a quarterback first at LSU and then in the NFL, winning a pair of Super Bowls while Tom Brady’s backup in New England.

Now he watches as his son get his chance at playing for McNeese State.

“(Micah) has become a real student of the game,” Rohan said. “You can see it in the way his game has grown and how he has gotten better and better.

“Micah grew up around the game and he understands it. He was around friends of mine at the highest levels and that has rubbed off.”

The two talk every Friday night before games and go over what Micah thinks of the coming day and his preparation.

“I learned a lot from how he got ready for a season, what he ate, how he took care of himself,” Micah said. “He taught me about the game and things to look for and how to adjust.”

Micah has done that, getting more and more playing time this season and making the most of his chances. He has recorded 20 tackles, four for losses including a sack, for the rebuilding Cowboys (1-3).

His best game came at Rice, when he recorded 10 tackles against the Football Bowl Subdivision program.

Two weeks ago he had a sack in the end zone for a safety against Alcorn State. Last weekend his hit led to a fumble and touchdown for fellow defender Enos Lewis that helped McNeese to its first win of the season.

Micah, who had eight tackles last week, has forced two fumbles this season.

“We are really excited about him,” said Cowboys head coach Gary Goff. “Micah made two big plays the last two games and he has really come a long way for us. Can’t wait to see how he keeps growing.”

For Micah it’s the crunching plays that make him glad he went to the defensive side of the football.

“You get a stop and shift the game, that feels great,” he said. “It is fun to help make a play like that and get the ball back for your guys. And when they lead to touchdowns that’s the best.”

It wasn’t always easy for Micah, who, like others his age, had to deal with the loss of a season to COVID and an uncertain future as the landscape of college football and recruiting changed.

The pandemic left the redshirt freshman with few options for college scholarships. However, he never wavered in his desire to play on this level.

“I’m proud that he stuck with the script,” Rohan said. “He is mature beyond his years. It was so tough to go through all that his senior year and not know what was going on, but he stayed with it and kept working.”

The 6-foot-2, 236-pounder from University Lab in Baton Rouge has his own dreams of playing in the NFL and maybe one day winning a Super Bowl ring. Why not? He has seen his father’s two.

“I don’t see them much, but I know he’s got them,” Micah said. “I know what it took for him to earn those also.”

As for being a quarterback, well that just wasn’t for him.

“He could throw the ball, but his physicality and attitude was always toward playing defense,” Rohan said.

He may not have followed completely in his father’s footsteps, but he has found a way to play outside his shadow while staying on the same course.

It was a lesson learned the hard way.