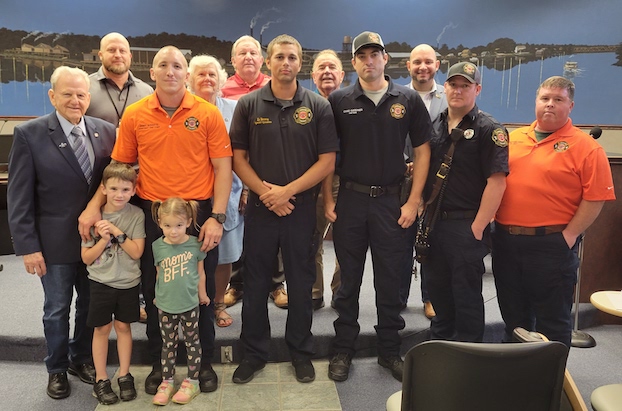 In Westlake, a team of firefighters took a different route to protect lives and property Sept. 15.

“The department has been working on a special operations team,” Fire Chief Jonathan Duff reported to the City Council at the Sept. 19 monthly meeting.

Almost a year ago, the council approved the purchase of a Whaly boat, a safe and sturdy boat that can take rough handling sometimes required for a rescue operation. Duff said the boat, about a $10,000 expense, was almost the only expense associated with starting the rescue operation, as the men trained and practiced mostly on their own time. They have trained with each other and with the Calcasieu Parish Sheriff’s Marine Division and the Lafayette Police Department.

“On the 15th of September, we got a call from Police Chief Wilrye that somebody had jumped into the water from the top of the Interstate 10 Calcasieu River Bridge,” Duff said. “I called the guys out. Some were home. Some were on the job. They mobilized. They put in at Ripley’s and they started to search. Officer Lewis gave them the best idea of where they thought the person went into the water, but you know from the top of the bridge that’s a big area.”

They located the person who was barely above water. From the time the team was dispatched to getting the person out of the water and into the ambulance waiting on the bank was 30 minutes. The ambulance transported the survivor to a local hospital.

“Another couple of minutes and this person would have sunk, been underwater and we would have spent a lot more time recovering the body,” Duff said.

“It’s exactly the type of operation that we’ve been training for,” said Boyett. “That’s our job. Protect life and property.”

Duff thanked the council for allowing them the funds to purchase the boat.

“We wanted y’all to know that your decision resulted in a life saved.”