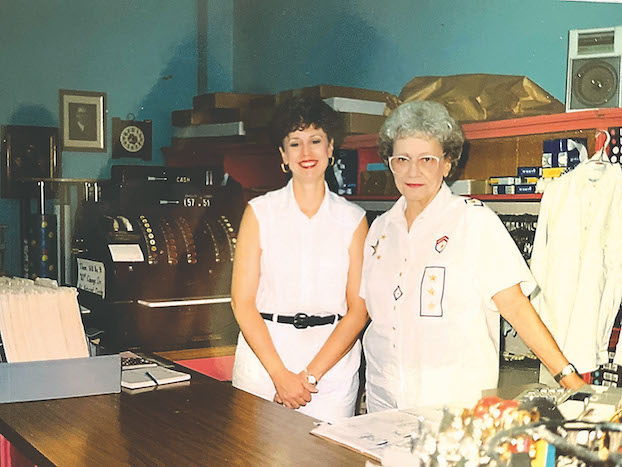 Abby McMurry Ferguson, who chose social work as her college major and did a stint for the Peace Corps, did not see retail in her future. Now, she can’t see herself doing anything else.

Ferguson, the owner of Etie’s, a Children’s Shoppe, is the great-granddaughter of Cora Etie who opened the first Etie’s in 1917. Etie is most likely a shortened derivative of Etienne’s, according to Ferguson. It is pronounced, ee-TIES (long e, long i, emphasis on the second syllable).

“My great-grandmother was a woman ahead of her time,” Ferguson said. “At first, the store was a millinery, a hat store. She sold piece goods during the war, then women’s and children’s clothing.”

In 1928, the store moved into the building it’s in now, at 206 S. Huntington St. in Sulphur, and operated at that location successfully until 1998.

Ferguson said her great-grandmother was not only ahead of her time because of her success during an era in which it was mainly men who were “in business.” She was also savvy when it came to staying current with trends.

Ferguson and her husband moved home to Sulphur in 2017. The family still owned the building. When the architect leasing the shop moved out, Ferguson’s father thought he might put the building up for sale.

“She told her husband, ‘Dad wants to sell the store. We have to do something.’ He said if I can think of something we can do, we’ll keep it. I’m too sentimental for my own good,” Ferguson added.

“You complain you can’t find clothes for the boys,” was her husband’s response.

Ferguson has two sons and it was true. She liked her little ones to look good for church and special occasions, and had trouble finding what suited her. She says she has always heard that girls are more fun to dress, but she has boys, and she knew it didn’t have to be that way. Research began and included visiting children’s stores in New Orleans, The Woodlands, Dallas and as far afield as San Francisco. The Woodlands shop was her favorite. It included a book selection. The owner talked Ferguson through the process of a business plan and met her at her first market. When vendors met her for the first time, they warned her that the girl’s clothing would sell better, and she stuck to her guns, paying as much attention to the boy’s clothing as the girl’s.

“Up until that point, my retail experience included watching my grandmother work and helping her in the shop,” Ferguson said.

She re-opened Eties in early 2018, and after Hurricane Laura took the roof in 2020, she couldn’t imagine not re-opening. In 10 months repairs were completed on the store on which she’s put her own mark and held on to vestiges from the past.

“I love hearing the stories,” she said. “We had someone come in the second week we had just opened up.”

A woman came in and apologized that she didn’t have anyone to buy for. She just wanted to come in because she “missed this place,” Ferguson said.

The old open and closed sign, a glass cabinet from the 1917 store, the antique cash register and cash register stand are in the store, as are photographs from the past. Ferguson carries some of the same brands that have been in the store for years and years such as Paty and Feltman Bros. They still offer free gift wrap. Her aunt was insistent and agreed to “train” her. At her very first market, the vendor told Ferguson that she thought they used to have a store in Sulphur. They did. It was Etie’s.

“She knew my Aunt Debbie. It was a full circle moment for me,” Ferguson said.

Unlike her great grandmother, grandmother and aunt, Ferguson carries only children’s clothing in sizes youth to extra large. She also carries toys. One of her most successful promotions is the birthday bucket.

“Two weeks before a child’s birthday, we put out a galvanized bucket with all the things they want for their birthday,” Ferguson said. “During the next two weeks, friends and family can come in, pick out something from the bucket, which is always filled with a variety of items, starting as low as $15. People from out of town can call and find out what’s in the bucket and spend whatever amount they’ve budgeted for a gift.”

Ferguson strongly encouraged shoppers to bring in their children. There is a place for them to play and toys to play with.

“This is not a ‘don’t touch anything’ shop,” Ferguson said.

Her own children are there in the afternoon.

The shop is still a family affair. Ferguson’s dad covers for her when she is out of town. When that happens, her aunt pitches in as well. Sometimes she tells her father that she hopes her grandmother would be proud, but she doesn’t compare herself with her.

“She was my favorite human,” Ferguson said. “I adored her and I would like to think she would be really, really excited.”

“I fussed at my parents when they sold it,” she said.

Her parents told her that the people who bought it loved it, and they didn’t see them putting it on the market, ever. However, in a way that can only happen in Sulphur, the person working on Ferguson’s aunt’s air conditioning told her the “old McMurry house was on the market.”

Ferguson and her aunt called the owner to ask if they could “just see the house one last time.” Her Aunt Debbie pointed out that her name was still there, etched in the patio concrete.

Yes, she purchased the house – as her aunt pointed out, it already had her name on it – and she continues the tradition of the importance of family ties, community ties, and Etie’s.

“Sometimes customers who come in the shop for the first time call me Ms. Etie,” Ferguson said. I’ll take that. I don’t mind a bit.”