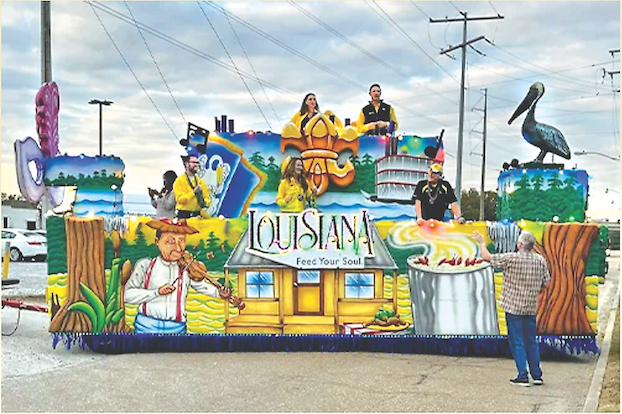 The Louisiana tourism-inspiring “Feed Your Soul” float features colorful designs including the state flag, a Cajun fiddler, a boiling pot of crawfish, a riverboat and the state bird, the brown pelican. (Special to the American Press)

The Louisiana tourism-inspiring float “Feed Your Soul” is set to make its appearance in this year’s Beauregard Parish Fair Parade on Oct. 4, according to officials.

The float, depicting iconic images of Louisiana culture, has traveled across the state and beyond, appearing in last year’s Mardi Gras festivities in New Orleans and in the Rose Bowl parade in California in December 2021.

In the DeRidder parade, the float will be carrying members of the DeRidder City Council, and member John Marcello was instrumental in bringing the infamous float to the historic parade.

Marcello said his work to bring the float to DeRidder began earlier this year when he attended a meeting of the Louisiana Municipal Association in Lafayette that was also attended by Lt. Gov. Billy Nungesser.

“When Mr. Nungesser spoke about the float, he mentioned that his people would help to make it available to communities across the state that were interested. Well, when he finished speaking I was the first person to greet him at the stage because I just knew this would be a great thing for our city,” Marcello said.

Marcello’s initial conversations about the float began in August, but it wasn’t until Monday that he received the call confirming the float would be available the day of the parade.

Marcello said he knows many people in the DeRidder community do not often get the chance to enjoy the Mardi Gras celebrations in New Orleans and have not seen the float in person, and for that reason he said he is especially excited for the chance to bring it to DeRidder.

“I think this is something that everyone in our community will enjoy, especially the kids, and I can’t wait to see the reaction the float gets as it makes its way through DeRidder,” Marcello said.

This will be the first time in the parade’s history that all members of the DeRidder City Council are on the same float in the parade. In past parades, council members have typically appeared individually for campaigning purposes, but with all present council members recently elected to their posts, Marcello said it made since that this float would bring them together.