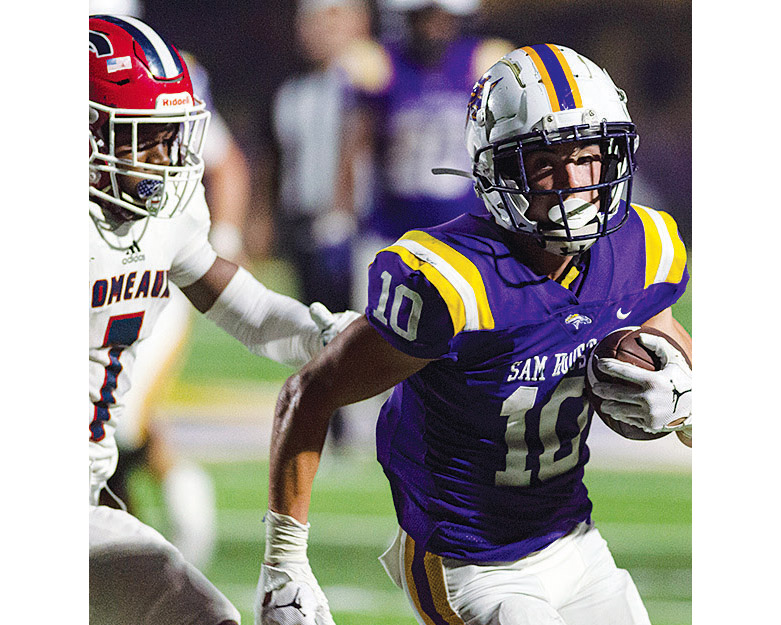 MOSS BLUFF — There was no emotional letdown this week for the Sam Houston Broncos.

A week after beating rival Barbe in double overtime, the Broncos routed Comeaux 62-22 Friday at home.

“It feels good,” Sam Houston head coach Chad Davis said. “It is always good when you come off a big emotional win like that last week and your kids come out and keep fighting.”

“It is something that we have been preaching to the kids since day one,” Davis said. “We got to get momentum on our side.

“We got to have some success and get some confidence built and that is where we are at.”

“They are starting to click,” Davis said. “You can’t ask anything else out of them. They played hard and are doing all the right things.”

Stout completed 12 of 17 passes for 145 yards. Dronet made four catches for 61 yards and a 38-yard rushing touchdown.

Stout’s first touchdown pass went to Jaxon Landreneau with 2:06 left in the first quarter for 25 yards, finding his receiver wide open in the end zone.

He hit Dronet, who made a diving catch, for a 13-yard score with 6:35 left in the second quarter. Four minutes later, Stout connected with his twin, Ty Stout, for a 9-yard score, then closed out the first half with an 11-yarder to Landreneau.

Dronet and Stout hooked up again on a 18-yard score in the third quarter.

The Broncos’ defense also had a big night, limiting Comeaux to 262 total yards, including 110 in the first half, and forced four turnovers for a second consecutive game.

“They are doing a great job of rallying to the football,” Davis said. “They are playing as a unit and playing physical up front. We are doing a good job of keeping everything in front of us.”

D.J. Doga scored a defensive touchdown for a second consecutive game, recovering a fumble in the end zone at the end of the third quarter.

Hunter Dautriel recovered a fumble in the first quarter to set up Dronet’s touchdown run. Caleb Lemonier’s recovery led to the Broncos’ final touchdown of the first half and Leighton Hickman set up Sam Houston’s final score, recovering a fumble on a kickoff to start the fourth quarter.

Comeaux wide receiver Jaylon Domingeaux was pressed into service at quarterback after starter Jayden Sonnier was hurt at the end of the Spartans’ (0-4, 0-2) first offensive possession.