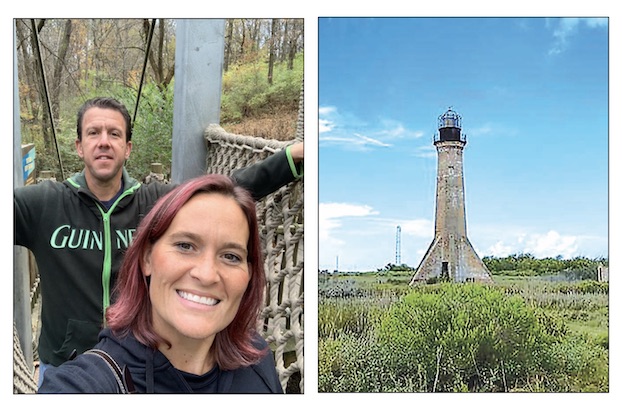 The Sabine Pass Lighthouse isn’t open to the public – yet. However, funding is now available that will make it possible to put the stairwell back, seal out the water and button it down, according to the Cameron Preservation Alliance president Andrew Tingler.

He admits there are days that the efforts to preserve the structure erected in 1856 can feel like a lost cause, but he’s not throwing in the towel.

Tingler, a Johnson Bayou native who now lives in Grand Lake seems ideally suited for the task. He is a serious runner who has entered and finished a marathon, a meteorologist for National Oceanic and Atmospheric Administration and an avid gardener who sells his cut flowers at the local farmer’s market.

“When I was growing up, the lighthouse wasn’t accessible, but I could get there on my four wheeler,” he said.

The Sabine Parish Lighthouse was first fueled by whale oil, and it endured its share of hurricanes (and at least one cannonball) before it was abandoned in 1952. In 95 years, it remained lit except for a brief period during the Civil War. The base of the 85-foot-high structure is 36-feet in diameter. Walls are 18 inches thick.

When the first serious work began to stabilize the lighthouse, Tingler was away at school. Afterward, he took jobs in Florida and Minnesota.

“In the Great Lakes and along Florida’s coastline, there are restored lighthouses that thousands visit every year,” he said. “Lighthouses fascinate us because those that exist are a throwback to an era we will never experience again. Cape Florida’s is not in as bad a shape as ours is, but it’s in pretty bad shape. The problem is access, although there have been advances.”

In 1981, the Sabine Pass Lighthouse was placed on the National Register of Historic Places.

Carolyn Miller is responsible for starting the Cameron Preservation Alliance in 1999, and she and the board were making great strides, applying for grants and gaining traction. In 2001, ownership of the lighthouse was transferred to the Alliance. Miller continued preservation efforts until Hurricane Rita in 2005, according to Tingler. In 2011, Tingler moved back to Cameron Parish to be closer to family and away from Minnesota blizzards and winters with temps as low as -20 degrees.

“At the dedication of the Police Jury Annex Building I asked Carolyn what was going on with the lighthouse, and she said, ‘not a lot.’ Everyone was still working on restoring homes after Hurricane Rita and taking care of family members.”

He wasn’t looking to lead preservation efforts. He just wanted to help out. After attending a couple of  meetings, he was elected president.

In addition to being husband, father and chauffeur to two, runner, gardener, Alliance president and full-time meteorologist, he agreed to do an Arcadia Publishing book, Images of America, Cameron Parish.

“The company called the week after Hurricane Laura,” he said. “I didn’t ask how they got my number or why they asked me to do it. I was trying to deal with everything that was going on at the time.”

Then he realized the project would make the history of the parish available to more people. Cameron Parish coastline and residents are disappearing. About 5,500 or so residents remain in the parish/county with the most land area in the United States.

The book project was a plug-in template, requiring a set number of pages and photographs. That kept it simple. He had some of the historical information collected already.

Photos of the rural parish’s pioneers, small family businesses, oil exploration, maritime culture, hunts and hurricane disasters came in from Chicago, Dallas, Austin and throughout the parish, an amazing feat considering not many residents had cameras at one time and residents lost everything, including photos, after Hurricane Audrey in 1957. More photographs and memorabilia were lost to subsequent hurricanes.

“McNeese and some other universities had photos we were able to use,” he said.

According to the caption in Tingler’s book, Roland “T-Bolo” Trosclair’s Icehouse supplied ice to the shrimpers and fisherman of Cameron, including the Trosclair Canning Company, for decades until 2004. In 1975, T-Bolo painted the mural to greet motorists as they arrived in the small community from the ferry.

Book copies are available at Brown’s in Hackberry, from the Grand Lake Library or from Arcadia Publishing.

The lighthouse is located on La. Hwy. 82, one mile east of the Louisiana/Texas Causeway Bridge in Johnson’s Bayou. Travel is allowed, but the area hasn’t been bush hogged in a while. Visitors must text Julie Carlson first at (409) 460-1851 or call the Johnson Bayou Library.

A specialty Sabine Pass Lighthouse license plate was issued in 2018. The cost is $20 on top of the normal yearly vehicle fee and proceeds help the Alliance. Purchase through the OMV website. Bob Hensgens sponsored the bill. David Eakin did the design work.