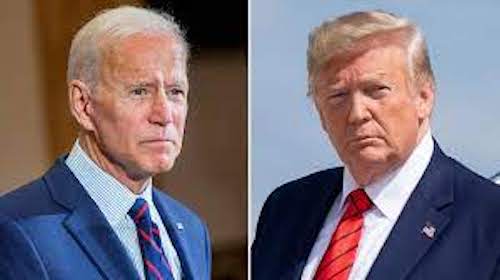 If President Joe Biden, left, and former president Donald Trump are the only choices for president in 2024, the country is in real trouble.spectrumlocalnews.com

Is American democracy in trouble? You bet it is. We had a Cold War, but there has been nothing like the current threat to our form of government since World War II.

The German army under Adolf Hitler launched the war when it invaded Poland on Sept. 1, 1939. The Japanese got the United States involved when it bombed Pearl Harbor on Dec. 7, 1941.

The United States and its allies won that terrible war, but there was a major difference from the current threat to our democracy. Americans responded to that threat with amazing speed and the country was truly united in its efforts to defeat the enemy.

Today, we are a country divided like never before. President Joe Biden pledged to defend democracy, but he doesn’t have the citizen or congressional support to do it. Former President Donald Trump can’t do it because he is one of the major reasons democracy is in danger.

Members of Congress can’t do it because they, too, are divided down the middle, just like the country. The legislation they have managed to enact is few and far between.

Inflation is the country’s biggest problem at the moment. Biden gets blamed for that, but the supply chain issue and other factors are beyond his control. The failure to control our southern border is the Biden administration’s fault, but Congress shares the blame because it has refused for years to create a workable immigration policy.

The Associated Press said Biden’s efforts to defend democracy “don’t seem to have produced any significant shift in public opinion.” An NBC News poll late last month ranked threats to democracy as the most important issue ahead of the midterm elections.

Two-thirds of Republicans believe Biden wasn’t legitimately elected president, according to an AP-NORC poll. Thanks to Trump, they believe that votes were switched, voting machines were corrupted, and that fake ballots were cast in favor of Biden because pandemic-era policies made voting too easy.

Candidates have signaled a willingness to simply refuse to accept the results of their election if they lose. And election workers across the country are getting death threats and are harassed online, pushing many to resign.

The executive director of the Democracy Program at the Bipartisan Policy Center think tank said, “It’s: ‘If my candidate loses, I’m going to drag this out as long as possible. I can cut the legs out from the person who beat me from taking office.’ That’s a new feature and it’s pretty dangerous. We can’t have an election system where people aren’t willing to lose.”

The most disturbing news we heard recently was that Trump winked at QAnon for years but is now embracing its baseless conspiracy theories. QAnon is an American political conspiracy and political movement. It originated in the far-right sphere in 2017 and centers on false claims made by an anonymous individual or individuals known as “Q.”

Trump in 2020 said he didn’t know much about QAnon. However, last week he reposted an image of himself wearing a Q lapel pin overlaid with the words “The Storm is Coming.”

The AP said in QAnon lore, the “storm” refers to Trump’s final victory, when supposedly he will regain power and his opponents will be tried and potentially executed, on live television. An AP analysis found that Trump is promoting QAnon on Truth Social, his social media platform.

A professor at Georgia State University has studied QAnon and wrote a book about the group. She said QAnon are people who have elevated Trump to messiah-like status and that is why Trump is seen as Jesus in online QAnon spaces.

QAnon conspiracy theories have triggered violence in some places. The AP said last year a California man who told authorities he had been enlightened by QAnon was accused of killing his two children because he believed they had serpent DNA.

Police fatally shot a Michigan man who they say had killed his wife and severely injured his daughter. A surviving daughter said she believes, even though he had mental issues, her father was motivated by QAnon.

If this country can’t find some new and younger faces on its political scene, it doesn’t appear there is much hope our leadership will change. To think that Biden and Trump might be our only choices as our next president is perhaps the scariest future we can imagine.

As a student and teacher of American history who loves this country, I am convinced we can do better if we want to save our democracy.