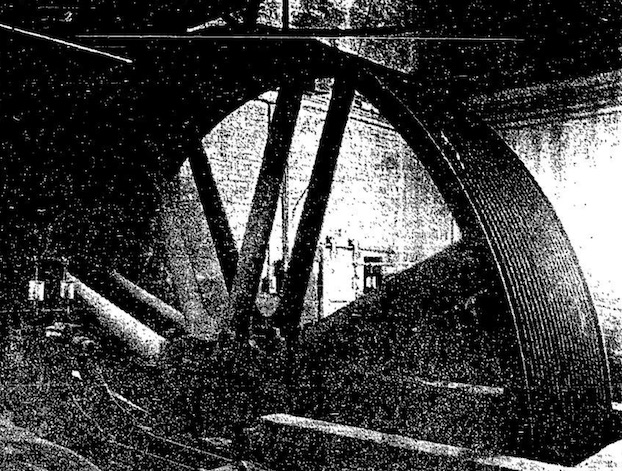 What happened to the huge, horizontal steam engine that powered the rice mill in north Lake Charles in the 1950s?

I haven’t been able to find what happened to the steam engine, but I found a trove of information in the American Press archives on the engine itself.

At one time, the Louisiana Rice Milling Co. at 401 N. Kirkman St. was the largest rice mill in the United States. It ran 24 hours a day, in two 12-hour shifts, filling waiting barges in the Calcasieu River and railroad cars with milled rice.

In the heart of this-once mighty agricultural facility was a 1,200-horsepower Hardie-Tynes Cross-Compound Corliss steam engine. In addition to being the heart of the mill, it was also the soul.

The engine was build in 1907 for the National Cement Company is Ragland, Ala. Louisiana Rice Milling bought the engine for $17,000 on April 24, 1926, and it was overhauled then shipped by rail to Lake Charles in 1927.

The engine produced a maximum of 107 revolutions per minute. It’s flywheel weighed 40,000 pounds and was 16-feet high.

“The steam engine directly powered the mill and all the elevators for the six floors,” according to an American Press article dated Sept. 25, 1977. “It even ran the generators which provided electricity for the plant.”

Two huge boilers, manufactured by the Union Iron Works in Erie, Pa., made the steam.

Then-Superintendent Sheffield Alex told the American Press the steam engine “was a beautiful running thing, but it wasn’t dependable.”

“After the boilers reached a sufficient temperature through force-feeding with crude oil, rice hulls were used for fuel,” Alex said. “An elaborate water system returned the burnt hulls to a bin and a huge condenser turned the steam back into water. All very efficient.”

Ultimately, though, the engine was shut down because of expenses.

“We needed an engineer, an oiler and two boilermen,” he said. “The engine supplied power throughout the mill by a rope system over 500-feet long. When the rope broke, which wasn’t too often, we had to shut down the whole thing, splice the rope and start again. It took a full 20 minutes to stop the engine. So, if a man got caught in it, that was it.”

Alex said an engineer was required to be on duty at all times and he was in charged of a “kill” button attached to a whistle.

“You could hear that whistle everywhere,” Alex said.

“It was hard to transmit power to other areas if we needed it, so electricity became handier,” Alex said in the 1977 article.

The mill shut down production in 1963 when it was purchased by Colgate-Palmolive Co. and converted to a storage facility for rough rice.

The 1977 article included pictures of a cobweb-covered engine and light coming through the ceiling of broken shafts in the engine room.

Is there anyone in the area who repairs grandfather clocks, cuckoo clocks and other wind-up table clocks? Before Hurricane Laura there were several places and/or people who did, but they have either closed or moved away.

After calling several watch repair shops and jewelers in the area, I received multiple referrals to the Mountain Clock Company, which is located in DeRidder. The repair shop, which also doubles as a clock museum, is run by Jason Louvier, the “clock doctor,” at 411 South Washington St.