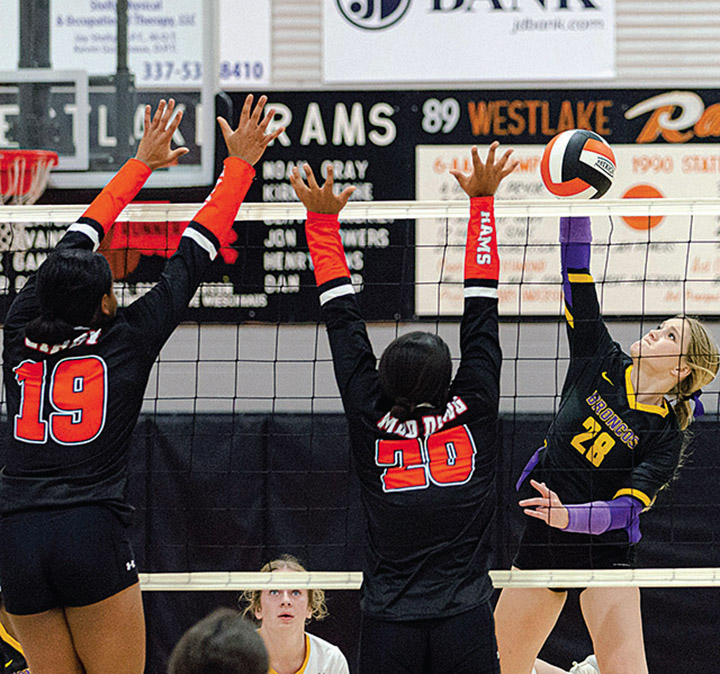 Sam Houston’s Carolina Edison skies to get one of her seven kills in a straight-set win over the Rams Tuesday in Westlake. (Rodrick Anderson / American Press)

“It was a good atmosphere, which I figured it would be in Westlake,” Sam Houston head coach Rene Fontenot said. “Westlake did a good job of challenging our defense.

“It was nice to beat them in three because it could have easily gone to four.”

Sam Houston (15-5) entered the game ranked sixth in the most recent Louisiana High School Athletic Association Division I power ratings and has won six of its last seven matches.

“They are continuing to evolve,” Fontenot said. “It is little things that we say we need to work on now, like the serve-receive ability needs to be a 2.0 or above. Then that becomes the focus.

“As long as we keep knocking things out of our way, we will progress.”

Westlake almost pushed the Broncos to a fourth set. But Sam Houston stuck to its outside game that led to 11 points. Ava Henry and Carolina Edison combined for nine kills in the set. Henry finished with 11 kills and 12 blocks, and Edison added seven kills and four aces, including two in the third set.

“They have a lot of big, heavy arm swings, and we typically mix in a lot more movement,” Fontenot said. “We weren’t doing that. We were just stacking in the middle and trying to go head-to-head. Even when they had the smaller middle, we were better on the outside.”

“We knew we needed to be on the blocks down the line,” Westlake head coach Gloria Fontenot said. “The first and second set, they got us down the line multiple times. We just kept stressing that throughout the game.

“We needed to get some blocks down the line and shut them down.”

The loss ended a six-game win streak for the Rams, the No. 4 team in Division III.

“One of the things I like about this team is they are not one to just roll over and give up,” Gloria Fontenot said. “Sometimes you see that in a young team.

“We knew Sam Houston was good, one of the best in the area, if not the best. It doesn’t matter who they are going up against, they are going to go out trying no matter what.” 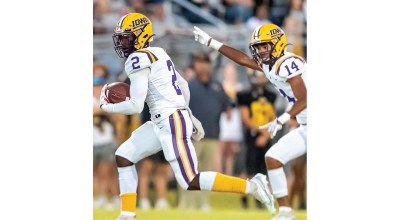