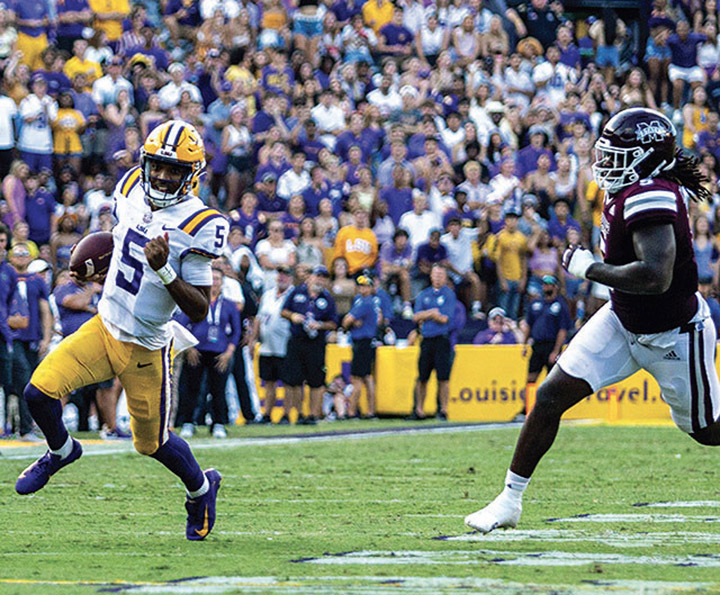 LSU quarterback Jayden Daniels scrambles outside to get the first down against Mississippi State during their SEC opner Saturday night at Tiger Stadium in Baton Rouge. Daniels ran for 100 yards and two touchdowns, and threw for 210 yards a TD. (Dennis Babineaux / Special to the American Press)

“He was tough as nails,” Kelly said of his transfer quarterback after the Tigers came alive for three touchdowns in the fourth quarter to beat Mississippi State 31-16. “He left it all out there and earned the game ball tonight.”

You’d probably get no argument from an LSU crowd that came merely hoping for the best.

But maybe the singular game ball was only because there wasn’t enough spare pigskin to go around for an entire Tigers defense that kept LSU in the game early and throttled the high-powered Bulldogs’ Air Raid offensive shenanigans all night.

“Two outstanding defenses,” Kelly said. “But ours was better in the second half.”

The offense, which had two true freshmen starting in the offensive line, came around just in time to dominate the fourth quarter.

“We were shooting ourselves in the foot early,” Kelly said. “I knew we were going to settle in and play better football. It was just a matter of we had to play great on defense, and we did early, to stem the tide until we started playing better (offense).”

After LSU long snapper Slade Roy recovered a muffed punt return at the Bulldogs’ 9-yard line, Daniels’ 3-yard scoring run two plays into the fourth quarter gave the Tigers their first lead, 17-16, and the offense never looked back. The Tigers added an 85-yard scoring drive capped by Josh Williams’ 7-yard run and a 47-yard scoring run with 4:50 to play. It was the lone carry longer than 9 yards by a Tigers running back. Daniels again led the rushing attack with 100 yards to go with his 210 yards passing.

“There were guys making plays in the second half,” Kelly said. “Jayden made plays. Receivers stepped up, the backs stepped up — We were able to control the line of scrimmage when we needed to run to close out the football game.”

But maybe it was fitting that the defense — nickleback Jay Ward — sealed the deal with an interception on the Bulldogs’ last possession.

Mississippi State (2-1, 0-1 SEC) managed only a field goal in the second half and really never got in its usual rhythm while taking a 13-7 halftime lead.

“Credit to their coaching staff,” Mississippi State quarterback Will Rogers, the SEC’s leading passer coming in, said after being held to 214 yards passing. “They did a really good of showing one thing pre-snap and something completely different post-snap. They moved a lot with their front seven.”

That was the LSU (2-1, 1-0) plan against a Bulldogs offense that thrives on getting the ball to playmakers in space.

“The most important thing is that you can’t give them a pre-snap look that is comfortable,” Kelly said of defensive coordinator Matt House’s scheming.

“Our players did an incredible job of following through with a game plan,” he said. “That’s players being disciplined and that’s mixing the up cals. We did not give them the free dump offs to the backs, which gives them really favorable situations. It forced them to execute bas down the field … they hadn’t shown they like to push it vertically.”

“It’s unfortunate,” Bulldogs head coach Mike Leach said. “We’re explosive. Explosive is fun and explosive means you hit a lot of dingers on somebody. But in the end that will catch up with you if you’re inconsistent.”

LSU’s offense joined the party late in the first half, forced to go up tempo to put up its first score with 46 seconds before the break, going 75 yards in seven plays that took 1:26.

“Obviously that worked very well for us,” Kelly said. “We started playing better … got some momentum going and carried that throughout the second half.”

It surely left LSU feeling a lot better after the season-opening 24-23 loss to Florida State when a fourth-quarter rally came up short as time expired.

“Our guys are gritty,” Kelly said. “They were down in the game, but they never questioned if they would be able to come back. We’re building that kind of mind-set.

“If we keep can incrementally keep working at it, this can be a pretty good football team.” 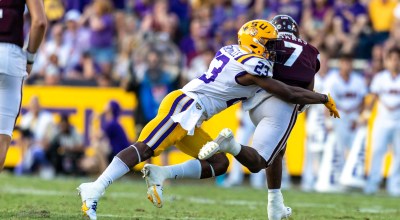 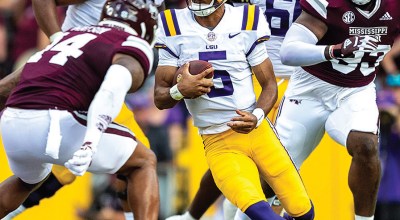