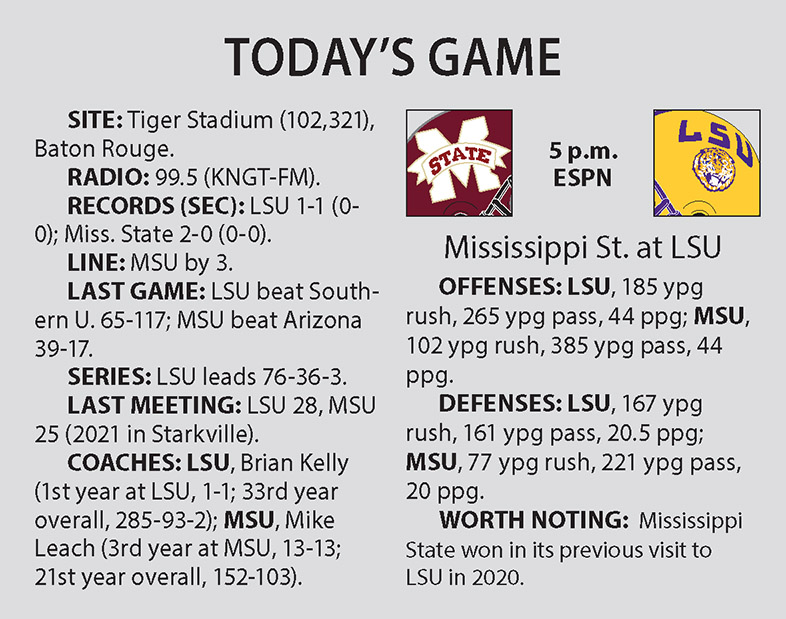 Some day maybe Brian Kelly will check off all the “first time” boxes as LSU’s head coach.

Today, when Mississippi State visits, is just another, following the frustrating debut against Florida State and his cakewalk of a first game in Tiger Stadium last week against Southern University.

But Kelly’s first conference game is more of an oddity than you might imagine.

“The previous job I had, it was an independent schedule,” Kelly said of his previous 12 years at college football’s stubborn loner, Notre Dame. “So it was somebody new each week, in a sense. Right?”

There were some annual games for the Irish, such as Southern Cal and Navy, and in recent years you can pretty much count on Stanford showing up.

Otherwise every new year was a new grab bag of new opponents.

There’s nothing new about Mississippi State and LSU.

Kelly’s first LSU conference game comes against a Mississippi State team that might not be the Tigers’ biggest rival, but it’s a series that dates to 1896. The 115 previous games are the Tigers’ most against any single opponent (LSU leads the series 76-36-3).

But it’s different for Kelly. The Bulldogs (2-0) are such strangers to Kelly he doesn’t even know any Starkville jokes.

But maybe his Notre Dame hitch helped prepare the Northeast-born-and-bred Kelly, who spent his entire coaching career in the Midwest, for this first whirl around the footprint of the brutal Southeastern Conference schedule.

“Like, this is a new opponent but I was so used to having new opponents on the schedule (at Notre Dame) it doesn’t feel that much different for me in terms of preparation,” Kelly said.

He did have one dip into conference play with the Irish. During the COVID year of 2020, Notre Dame played in the Atlantic Coast Conference, but it was a one-year deal so still filled with unfamiliar opponents that the Irish had little or no history with.

Still, like most Power Five schools, Kelly has a whole army of analysts at his disposal, a batallion of whom are assigned one team to study basically the entire year.

Mississippi State’s madcap Air Raid offense can be a shock to the system of even SEC veterans. It is a particular challenge to transfer all that study to players with only three days to work on it.

“Advance scouting does a really good job of coming up with their personnel and tendencies,” he said. “It’s just a matter of how we’re going to attack offensively and defensively.

“But it doesn’t feel foreign to me from that perspective.”

Other than defensive tackle Maason Smith, who’s lost for the season after tearing his left anterior cruciate ligament in the opener, Kelly’s own new team, a three-point underdog in today’s late-afternoon kickoff, should be at his strongest of the its season.

Running back John Emery, a projected starter, will play his first game since 2020 while serving an academic suspension. Edge rushers B.J. Ojulari (minor injury) and Alit Gaye (first-half suspension for a targeting penalty) are also back.

Kelly has also hinted at some changes in the linebacking corps, specifically for the while Mississippi State offense.

You can expect to a more athletic group, with more playing time for Micah Baskerville and freshman Harold Perkins.

“This game is tailor-made for their skill set,” he said.

But the plan for this “new” opponent has been months in the making.