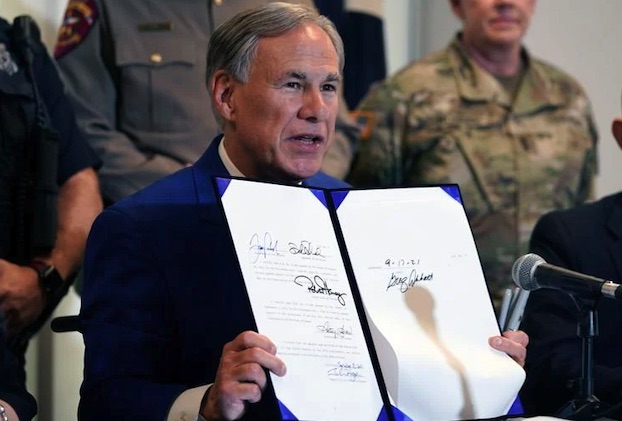 Texas Gov Greg Abbott displays a bill he signed into law that provides additional funding for security at the U.S.-Mexico border on Sept. 17, 2021, in Fort Worth. (Associated Press Archives)

By Bethany Blankley | The Center Square

In an effort to relieve Texas and border communities from an influx of people pouring through the southern border illegally, Abbott first began busing foreign nationals in the country illegally to Washington, D.C., in April. In early August, he began busing others to New York City.

“President Biden’s inaction at our southern border continues putting the lives of Texans – and Americans – at risk and is overwhelming our communities,” Abbott said. “To continue providing much-needed relief to our small, overrun border towns, Chicago will join fellow sanctuary cities Washington, D.C. and New York City as an additional drop-off location. Mayor [Lori] Lightfoot loves to tout the responsibility of her city to welcome all regardless of legal status, and I look forward to seeing this responsibility in action as these migrants receive resources from a sanctuary city with the capacity to serve them.”

With Chicago’s “Welcoming City Ordinance,” the city cannot legally deny taxpayer-funded services to individuals based on their citizenship or immigration status.

According to a report published by the Immigration Reform Law Institute (IRLI), Chicago is the third most dangerous Sanctuary Community in America.

Sanctuary Communities refer to government policies that discourage law enforcement officials from complying with federal immigration law in cities, counties and states, according to the Franklin County Law Library, located in Columbus, Ohio. Such communities generally refuse to cooperate with Immigration and Customs Enforcement officials to detain and remove dangerous criminal aliens.

In 2020, Lightfoot signed an executive order making “illegal aliens eligible for all city benefits,” and a city ordinance prohibiting city officials “from cooperating with ICE to detain illegal aliens, even if the alien is in the city’s gang database or is facing criminal charges,” the report said. In 2019, Cook County District Attorney Kimberly Foxx also hired an advisor to shield criminal aliens from deportation.

The mayor’s office did not immediately respond to requests for comment about the report and as of Tuesday night did not issue a statement about Abbott’s busing strategy.

President Joe Biden’s “refusal to secure the border is a direct threat to our national security,” Abbott said. “Texas is stepping up to protect Americans from these dangerous criminals.”