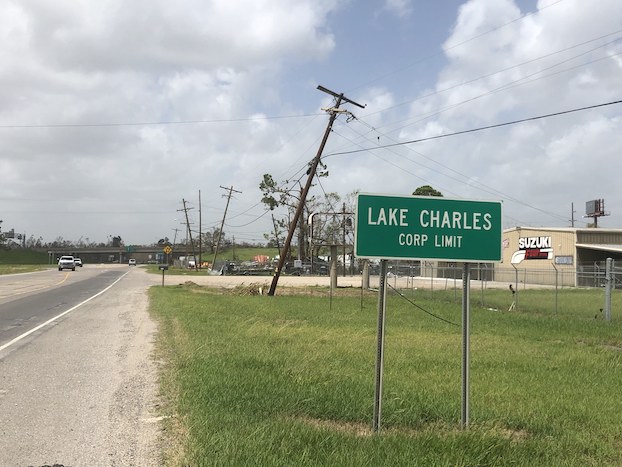 “I try to talk more about today and tomorrow versus yesterday, but I do think it is important to give some of you a reminder about what we have been through.”

Hunter recounted how Lake Charles became known as “the most weather-battered city in America.”

The series of disasters began with the landfall of the Category 4 storm Hurricane Laura on Aug. 27, 2020. “It was quite the event,” said Hunter. “Hurricane Laura was one of those events that will really define a generation for us here in Southwest Louisiana.

About 40 days later, Hurricane Delta, a Category 2 storm, made landfall. This storm increased damage on many homes and businesses in Southwest Louisiana that had already been damaged by Laura.

Then, in the first half of 2021, Southwest Louisiana faced a “once-in-a-generation freeze” in January and a “1,000-year flood event” in May. “When you put all of those things together collectively, you have four federally declared natural disasters over the course of 10 months,” he said. “That is actually more than any other city in American history.”

Hunter continued by laying out the many programs and initiatives that were put into place as a response to these natural disasters. These included programs such as the Water Bill Relief Program, ReTree LC, Spring Clean LA, Lake Charles Strong, Lake Charles Investors Day, and PPDR.

“As Louisianians, we did not sit on our hands. We got to work, and we certainly did not just wait for the federal government to come to town and kickstart everything.”

For Hunter, the ultimate goal is to not only reach full recovery in Southwest Louisiana, but to also improve the quality of life for all locals. An important part of this process is to harden infrastructure.

“We speak a lot about wanting to build back stronger, build back more resilient,” he said. “It’s not just talk for us here in Southwest Louisiana.”

Improving drainage has been a main focus. According to Hunter, there is the “largest multi-agency drainage partnership currently underway in this community’s history.” The Lake Charles drainage ordinance was updated for the first time in 30 years in the fall of 2020.

Additionally, the city borrowed money to expedite drainage updates. This includes “massive” underground CCTV examinations and cleanings of “every inch of underground drainage we have in the city of Lake Charles.”

Also, the Calcasieu Parish Police Jury, in partnership with the drainage districts, are cleaning out the larger laterals that are not within Lake Charles’ purview. It is estimated to cost over $100 million dollars.

“Much of what I have discussed, we are very hopeful and optimistic is reimbursable by FEMA, but at the end of the day, you can only sit on your hands for so long and wait on the federal government,” said Hunter. “We chose not to sit on our hands very long at all when we realized that we simply could not wait until the federal government came through with money. We were going to have to do things locally to the extent that we could.”

The city of Lake Charles has also installed updated water meters that will expedite water meter readings, which will quicken water line repairs during future natural disasters. This was funded by American Rescue Plan funds.

“These are some very concrete things that we have done and we are doing to make sure we’re ready for future natural disasters.”

Through recovery, the city of Lake Charles has been given the opportunity to put public assets in more efficient locations. “In the aftermath of an event like Laura, that gives you an opportunity to really look at things holistically.”

This has led to the development of a new Lake Charles Fire Department campus that will consolidate all of Lake Charles’ fire department assets into “one central location,” as well as a new Public Works campus, and a new water plant.

The city has also gone to great lengths to update building codes.

Businesses, both established and new, are thriving, according to Hunter. “We have seen businesses reinvest in this community in an amazing way,” he said. “Not only reinvest them to where they were, but grow even larger and more grand than they were before.”

“Lake Charles is not only bouncing back to where we were before, but we’re bouncing back stronger with new, major investments, announcements, and expansions.”

Hunter expressed that the array of multi-billion dollar corporations and “mom and pop” businesses are what make Lake Charles special.

Some major establishments that have broken ground in Lake Charles include Vexus Fiber, Tellurian LNG, the LNG Center for Excellence, and Caesar Entertainment’s Horseshoe Casino.

r project is the Lakefront’s facelift. Scheduled to break ground in the coming months are Port Wonder, Crying Eagle Restaurant and Microbrewery, Paul’s Rib Shack, and Lake Area Adventures Watersports and Watercraft rental. The “infamous” parking garage is currently being renovated. Hunter reported that there is in total $30 million in activity occurring on the Lakefront.

Despite the immense amount of progress that has been made, “there is still a path ahead of us.”

He noted how essential FEMA is to ensure continuous progress “We know that we’ve made a lot of progress, but we’ve still got strides to make,” said Hunter. “It is a slow but essential progress. This has unfortunately been the case for every single local agency.”

Hunter said that while they are frustrated with the timelines and “cumbersome nature” of FEMA’s policies, they are “cautiously optimistic.”

“We continue to push FEMA to honor their mission and their goal. We will continue to pursue opportunities to build back a more resilient community.”

In light of these frustrations, the city has hired a grants consultant to pursue further funding. Hunter also announced his proposal to partner with Ward 3 recreation to “update a master recreation plan.”

=He also announced his plan to launch a bond proposition. This was also done by the city in the years after Hurricane Rita “We absolutely will take advantage of every dollar from Baton Rouge and Washington D.C. we can find, but we need to reinvest in ourselves. And we need to do that locally.”

=Several projects from Just Imagine SWLA will be incorporated into this bond, and will be launched without raising taxes. The public will be asked to renew several existing taxes.

=While improving infrastructure and supporting Lake Charles’ economic health are paramount, for Hunter, restoring and enhancing SWLA’s culture is most important. “Quality of life matters.”

The city has been in communication with the local Arts and Humanities Foundation. This has led to a proposal that would provide a small increase in funding that would be distributed over a number of years. This will allow them to “reorganize and put together a true effort to see the type of arts and culture renaissance that we need in Southwest Louisiana.”

Hunter ended his presentation by talking about Lake Charles’ greatest asset; its people and “their resiliency, their tenacity, grit and compassion.”

“I truly believe we have some of the greatest people here in Southwest Louisiana, and I would take the people here over $10 million from the federal government any day of the week.”