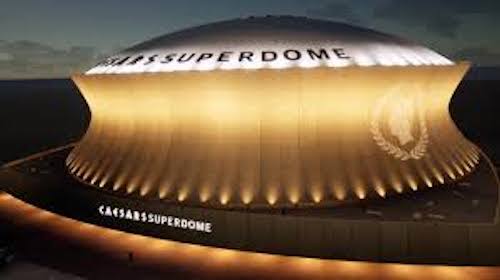 Voters approved construction of the Louisiana Superdome in November of 1966, and it is one of some major news stories during that month with national, state and local interest.neworleanssaints.com

While researching background on the Louisiana Superdome that observed its 47th birthday on Aug. 3, I ran across nearly a dozen news stories during November of 1966 that grabbed my attention.

Another major amendment approved on Nov. 8, 1966, was one that allows a Louisiana governor to serve a second consecutive term. Amendment No. 1 helped Gov. John J. McKeithen win a second term, the first governor in the last century to do it. Gov. Edwin W. Edwards came later and served an unprecedented four terms, but not all at the same time.

U.S. Roman Catholic bishops in late-November of 1966 called for dropping the bars that kept African Americans from living in many of the nation’s expanding suburbs. They called for a true sense of neighborliness, based upon a  conviction that all men are equal before God.

The bishops also called for stepped-up attacks on poverty, inadequate education, racial discrimination, and denial of the right to vote.

Before ending their meeting, the bishops abolished the mandatory rule against U.S. Catholics eating meat on Friday, saying it would become a matter of personal conscience. Pope Nicholas I (858-867) had explicitly decreed that abstinence from meat should be observed on Friday.

The Associated Press said the concept of Friday as a day of penance dates from the early days of Christianity. The day was set aside for acts of mortification and penance in memory of Christ’s death on that day.

The late Sam Tarleton of the American Press interviewed local Catholics that November and most of them said they would continue to eat fish on Fridays as a personal penance. However, one person said ending the ban would be a big help when out of town, which often makes it difficult to find seafood.

Methodists at their General Conference that November said racial segregation in their church would be abolished by mid-1972 at the latest under a mandate approved overwhelmingly by the conference. Methodists also voted to merge with the Evangelical United Brethren Church to become the United Methodist Church.

Voters in Lake Charles and Calcasieu Parish earlier that November gave overwhelming approval to merge the city school system with the parish system. A 1906 constitutional amendment had established the separate city school system.

Local state legislators in mid-November called for the installation of safety features on Interstate 10 West in the city where it goes under the U.S. 171 overpass. Collisions with supporting columns of the overpass had claimed six lives, the latest being three members of a Jennings family on Nov. 11.

Rep. Mike Hogan called the approach to the overpass a “death curve.” The state Department of Highways initiated steps on Nov. 14 to install guard rails at the curve.

State Police said about 18,000 cars traveled under the overpass every day at that time. Troopers said they felt adherence to the law would reduce the number of accidents.

Highway officials announced on Nov. 22 that a record breaking 93,352 motor vehicles crossed the Calcasieu River Bridge on the Labor Day weekend, the highest Labor Day count since the bridge opened to traffic on Sept. 28, 1951.

On Oct. 8, 1918, then Cpl. York killed 28 enemy troops and took 128 enlisted men and four German officers prisoner — all single-handedly. He was awarded the Medal of Honor, and the 1941 film “Sergeant York” starring Gary Cooper became one of my all-time favorite movies.

“Survivor of platoon slaughter tells of playing dead in dirt” was a Nov. 24 headline that caught my attention. Sgt. Julius Durham of Piedmont, S.C., and his fellow soldiers were attacked in the La Drang Valley in Vietnam.

The Viet Cong were picking up weapons from the dead Americans. One of them yanked Durham’s rifle away, his helmet rolled off, and his arm was bleeding badly, but he said he didn’t move and survived. It was a gripping story that came at the end of that busy November in 1966.