Portion of La. in Lake Arthur renamed in honor of Fox 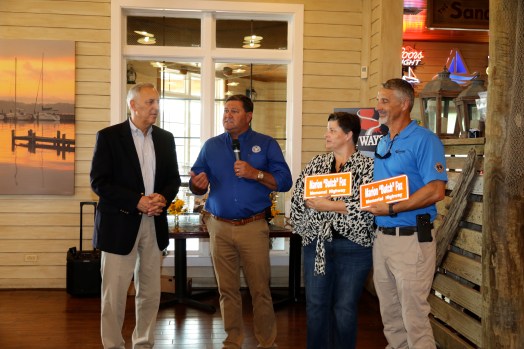 State Sen. Mark Abraham and State Rep. Troy Romero presents replicas of the highway signs designating a section of LA 14 in Lake Arthur as the Marion “Butch” Fox Memorial Highway to her children Anne Klenke and Ernest Fox. Fox will forever be remembered as one of Louisiana’s greatest ambassadors because she devoted her life’s work to promoting the state both domestically and abroad, according to Romero. (Doris Maricle / American Press) 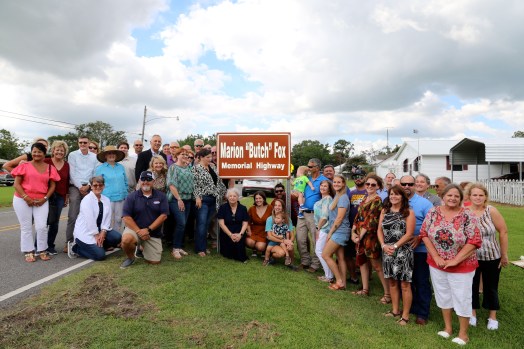 Public officials, colleagues, family and friends gathered Friday in Lake Arthur to designate a stretch of La. 14 from La. 380 to Fourth Street as the Marion “Butch” Fox Memorial Highway, honoring the late tourism and economic development leader in her hometown. She is recognized for the tourism and economic development contributions to Jeff Davis Parish and Southwest Louisiana, particularly with the scenic Flyway Byway, a 55-mile scenic cycling, walking and driving trail along La. 14. (Doris Maricle / American Press)

A stretch of La. 14 from La. 380 south to Fourth Street in Lake Arthur is now the Marion “Butch” Fox Memorial Highway, honoring the late tourism and economic development leader in her hometown.

Fox was the president/CEO of the Jeff Davis Parish Economic Development, Tourism Commission and Chamber of Commerce. She died in 2020 from complications related to COVID-19.

State Rep. Troy Romero, who sponsored the legislation to rename the highway to honor her legacy, said she was a major voice in tourism and economic development for more than 30 years.

“She worked tirelessly throughout her career to promote tourism and economic development because she wanted what was best for this parish,” Romero said. “She had an impact on her home parish and the state.”

Romero said Fox will forever be remembered as one of Louisiana’s greatest ambassadors because she devoted her life’s work to promoting the state both domestically and abroad.

“It’s very nice seeing her recognized, but we all wish she were here and being recognized,”  Fox’s daughter Anne Klenke of Sulphur said. “It’s so nice to see her legacy live on.”

State Sen. Mark Abraham said Fox made projects “come alive” so that others could see her visions.

“She was one of those go to people,” he said. “If I needed something or if I needed the correct information…if  I needed to know what was going on with a project, I knew if I called Butch she would get me the answers. If she didn’t know it, she’d find the answer.

Bill Sherman, communications director for the Louisiana Office of the Lieutenant Governor, knew Fox for a short time, but said she made quite an impression on him and others.

“I know everybody that I talk to at the Capital or in the tourism industry, have nothing but admiration and respect for her,” Sherman said. “They really loved Marion and her work. She was all about work and toeing the line for economic development and tourism for this part of the state and it was really impressive.”

said Fox paved the way and laid the foundation for others to continue to build on her work to make Jeff Davis Parish and Southwest Louisiana a better place to live and work.

“As you look around all over the parish, the Southwest Louisiana region and the state, Butch Fox had a hand in a bunch of it,” Petree said. “You can travel anywhere and any place and you’ll probably see a project that Butch worked in tourism or you’ll see some person whose life was touched by Butch through Big Brothers, Big Sisters.”

“With Butch it was never about being self-serving,” he continued. “It was about serving others. She wasn’t into taking credit for things she initiated or completed. She was all about the results. She was passionate about everything she did and the results of her passion and commitment to making things better for others will be remembered forever.”

She also served as an advocacy chair for the Louisiana Travel Association and Louisiana Association of Convention and Visitors Bureau and had just completed her term on the Internal Board of Commerce at the time of her death. She also served on the Louisiana District Export Council Board, the Jennings American Legion Hospital Advisory Board, the Christus St. Patrick’s Hospital Foundation Board, the I-10 Task Force and was chairman of the 2020 Census Committee for Jeff Davis Parish. She was also the former executive director of the Jeff Davis Parish Big Brothers, Big Sisters program.