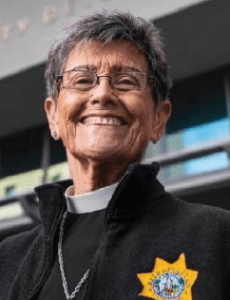 The Reverend Deacon Bonnie Lawes Polley, age 83, died peacefully at home in Las Vegas, Nevada on Thursday, August 5, 2022. Bonnie was born on February 8, 1939, in Lake Charles, Louisiana to Rose Thompson Lawes and Robert Bonnabel Lawes. She attended Lake Charles High School, Class of 1956. After graduation, Bonnie moved to Boulder, Colorado to attend the University of Colorado. It was there that Bonnie met Dave Polley whom she married in 1958. The couple moved to Albuquerque, New Mexico, in 1960. She worked as a dental assistant and David went to law school. After having the first of three sons, they moved to Las Vegas in 1964. In an early interview Bonnie stated ““We moved on Memorial Day weekend 1964, and I just remember it being so hot I was sure I had gone to hell,” Polley said. “And my mother, who was back in Louisiana, was sure the mob was going to get me.” In Las Vegas Polley had planned to stay at home with her son, but after about three weeks she got bored and took a part-time dental assistant job that soon became full time. She continued working while having two more children and then moved into a volunteer role placing dental assistants in offices. In 1974, she had a spiritual awakening and got involved in classes at Christ Church Episcopal. Her first experience speaking with inmates came in 1980 when a dental office asked Polley for a replacement for a woman she had previously placed in the office. When Bonnie found out that the women who had been replaced was incarcerated for killing her husband, she decided to go and visit her. After the visit, she knew what she wanted to do for the rest of her life. Bonnie was ordained a deacon in the Episcopal Church in 1982. At the time of her death, Bonnie had served as a Deacon at Christ Church Episcopal and as the religious coordinator and chaplain at the Clark County Detention Center for almost 40 years.
An article written in 2012 claimed that she had been called “the Mother Teresa of Las Vegas by some, and others have questioned her sanity”. In 2019, Singer-Songwriter CHRISTINA AGUILERA Receives The Inaugural Deacon Bonnie Polley Community Hero Award at The Shade Tree’s “Mask Off Gala” For Raising Awareness And Supporting Survivors Of Domestic Violence. The Las Vegas Review Journal interviewed Bonnie on March 3, 2022, in connection with “Ashes to Go” on the Las Vegas Strip. When asked why Christ Church Episcopal was placing ashes on the foreheads of visitors on a sidewalk on the strip, Bonnie stated “Because some people can’t come to church for whatever reason, we decided to take church to the people”. ““What better thing to happen in the midst of a busy day than to encounter God on the Strip.” Anyone who knew and loved Bonnie knows that one of her most enduring traits was her sense of humor.
According to her son, Seth, Bonnie’s vocation as a deacon was embedded with a specific mandate to serve God and the community by working with the poor. She was an exemplary deacon, embodying the call itself, and reminding others around her that service to the ‘least of these’ was service to Christ. As a member of the Episcopal Diocese of Nevada, she sat on countless committees, exercised leadership in many capacities, and rooted herself at Christ Church Episcopal in Las Vegas. She established food pantries, helped facilitate meals and hospitality for those most in need, and was instrumental in establishing Epicenter on the Parkway, a non-profit organization dedicated to the service of those whom she affectionately called her ‘people.” Bonnie was a founding member of the Huntridge Teen Clinic, which provides free to low-cost medical and dental care to adolescents; the Shade Tree, which provides shelter to abused and homeless women and children in crisis; and Parson’s Place, which provides transitional housing after shelters, rehab or incarceration.
She established food pantries, helped facilitate meals and hospitality for those most in need, and was instrumental in establishing Epicenter on the Parkway, a non-profit organization dedicated to the service of those whom she affectionately called her ‘people. A new ministry of Epicenter is David’s Digs (named after her late husband, Dave Polley) where homeless persons can shower, wash their clothes, receive telephone calls, and use as an address to receive mail.
Bonnie is survived by her three sons, Seth (Lori) Polley, Zachary Polley, and Matthew (Renee) Polley; her brother, Robert (Brock) Lawes; and four grandchildren, Alex, Catie, Catalina, and Sydney. She was predeceased by her parents, and her husband, David Polley. A memorial service for Bonnie will be held Thursday, August 11, 2022, from 3:00 PM to 4:00 PM at Christ Church Episcopal, 2000 S. Maryland Pkwy., Las Vegas, NV 89104.If you cannot attend in person, the funeral service for Bonnie will be live streamed on the Church’s Facebook page and YouTube Channel (ChristChurchEpiscopalLasVegas). A memorial service for Bonnie will be held in Lake Charles at a later date. Details will be provided upon confirmation of time, place and date.
In remembrance of The Rev. Bonnie, please donate to her nearly 40-year outreach project, the Epicenter on the Parkway. Electronic Donations can be made under the Memorial tab on Christ Church Episcopal Las Vegas’s website: Memorial | Christ Church Episcopal (christepiscopallv.org)