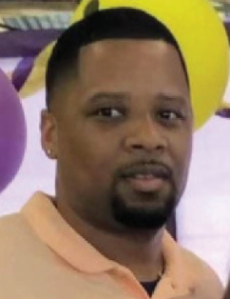 BASILE – It is with the heaviest hearts and great sadness that the family of Christopher Dominic Ceaser, announces the unexpected loss of a beloved father, brother, and friend on Tuesday, Aug. 9, 2022. He was 37. A Mass of Christian Burial will be celebrated at 11 a.m. on Monday, Aug. 15, 2022, at St. Augustine Catholic Church in Basile. Burial will follow in the Assumption Cemetery with Father Keenan Brown, Celebrant.
Christopher was a native of Basile and a resident of Pineville. He was born on March 7, 1985, to Edwin Augustus and Jacqueline Ceaser. He was a 2003 graduate of Basile High School and was an outstanding Bearcat athlete. He was a chef for many years in the casino industry. A chef: A person that touches more hearts than food. He was a big fan of Kobe Bryant, Michael Jordan and the Boston Celtics. Chris was very boujie and he loved to clown around but most of all he loved his family especially his children, Mykle, Tre’, Christopher Taiven, Kandon Drake all of Elton, and Jhayse of Oakdale; his maternal grandfather, Junius Ceaser of Basile; siblings, Marquita Augustus of Phoenix, Ariz., Ashley Augustus of Beaumont, Texas, Kandice Augustus of Phoenix, Ariz., Dawnyel King of Bryan, Texas, Paul “P.J.” Sanders of Pasadena, Texas, Jules Ceaser of Basile, Joseph Lucien and Kenny Parkerson, both of Beaumont. His memories and love are in our hearts forever and always.
He was preceded in death by his parents; paternal grandfather, Harold Augustus; paternal grandmother, Sue Chatman; and maternal grandmother, Dorothy Ceaser.
At the request of the family, visitation will be held at Ardoin’s Funeral Home in Basile on Sunday, Aug. 14, from 3 p.m. until 9 p.m. and again on Monday, Aug. 15, from 8 a.m. until time of service. A Rosary will be prayed at 6 p.m. on Sunday.
Family and friends may view this obituary and sign the guestbook at www.ardoinfuneralhomes.com
Ardoin’s Funeral Home of Eunice, 1210 S Ryan St., (337)432-6726 is in charge of arrangements.