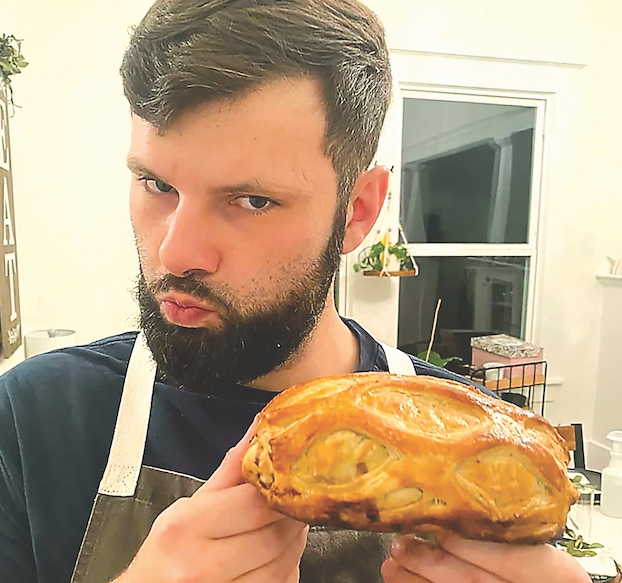 Calla Restaurant Executive Sous Chef Dustin Frederick remembers helping his grandparents set up and serve meals at Eastwood Pentecostal Church. He was too young to help them in the kitchen at that age. That came later. His grandparents, Frank and Faye Bradley, were known for their delicious food — especially their barbecue.

“I was just a child, but I have never forgotten that feeling of being a part of that, seeing the smiles on people’s faces, and how they expressed their appreciation for the food. It was very satisfying, and I can honestly say I still have that desire. I want each diner at Calla Restaurant to enjoy their food that much or more.”

Frederick’s first job, right out of high school was working in the kitchen at Mazen’s for Chef Jacob Gillett.

“I fell in love with the work,” he said. I love talking about food, sharing food with others, showing what’s possible with food, creating new dishes, getting those dishes on the menu.”

One of his secrets behind turning out the level of cuisine customers have come to expect from Calla is treating “each and every ingredient with the respect it deserves and pushing the envelope.” Lately, he’s excited about Calla’s local food sourcing endeavors, especially the high-end pink and blue oyster mushrooms coming from a Moss Bluff farm. These mushrooms are found in combinations served with the Snapper, Lamb and 1855 Prime Short Ribs.

Blue Crab Beignets are served with mint, almonds and an avocado schmear. A favorite since Callas’ start, this “Shares” menu item will probably always be on the menu and always be popular, according to Frederick. The Shares menu items make it possible to order smaller portions, pay less and if so inclined, share. Other “Shares” are New Orleans Style BBQ Shrimp, Smoked Duck and six other items.

Yes, burgers are on the menu. Healthy salads and power bowls can’t be compared to any other restaurant in the area.

“Our mission at Calla right now is to provide a premier experience of Southern New Orleans style upscale eatery.”

Calla, along with the James 710 and 121 Bistro is a Ben Herrera, – it has to be a complete dining experience – restaurant. To Herrera, details matter. The dining room has been recently renovated and seating added. The patio is climate controlled.