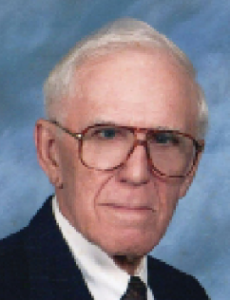 Otray J. Woods Jr., 90 years of age, passed away at 2:50 a.m. on Friday, Aug. 5, 2022 in his residence.
Mr. Woods was born on Feb. 12, 1932 in Gueydan, La. He graduated from Eunice High School in 1948. He received a degree in accounting from then SLI, now University of Louisiana in Lafayette in 1952. He first worked for Texaco in New Iberia until he entered the Marine Corps later that year. He was commissioned as a second lieutenant and served during the Korean Conflict. He was promoted to first lieutenant and was honorably discharged in 1955.
In 1957 he entered the field of public accounting in Alexandria, La. He successfully passed the CPA examination in 1960 and was recognized by the American Society of CPAs for attaining one of the highest grades in the nation.
In 1963 Otray joined the accounting firm, which is now McElroy, Quirk & Burch. He was managing partner/director of the firm for many years, until his retirement.
Otray was active in professional and civic organizations, being a member of the American Institute of Certified Public Accountants and the Louisiana Society of CPAs, in which he held various offices during his tenure. He was a speaker at several conferences on accounting and tax matters.
His civic duties included Junior Achievement, YMCA Board of Directors, and Junior Chamber of Commerce where he was recognized as outstanding member in 1964-1965 and 1967-1968. He served several terms on the Board of Directors of the United Way of SW Louisiana. He was a long-time member of the Lake Charles Rotary club and also served on its board. He was a member of the Pioneer Club. He served on the Board of Directors of the Chamber of Commerce of SW Louisiana and was elected as Chairman in 1980. For these services he received the AICPA and Louisiana CPA Society Public Service Award. Otray was appointed and served on the Calcasieu Industrial Board and also was a member of the Board of Directors of CARC (Calcasieu Association of Retarded Citizens).
Mr. Woods was the first chairman of the Chennault Industrial Air Park Authority Board of Commissioner when it was organized in 1987. He was instrumental in obtaining Boeing Aircraft as the first tenant at the air park and obtaining a grant from the State of Louisiana for the construction of the hangers and related facilities.
He was an avid fisherman and enjoyed reading historical and biographical novels.
His parents were Otray Woods and Cecile Fruge Woods Drost and he was the stepson of John L. Drost. He was preceded in death by his son, John Christopher Woods; daughter, Judith Marie Woods; brother, Lloyd Joseph Woods; step-brothers, Enoch Drost and John Jerald Drost; and a step-sister, Annette Drost Hagen.
He leaves to cherish his memory his beloved wife and lifetime companion of 70 years, Barbara “Bobbie” Comeaux Woods; his children and spouses, David and Joan Woods of Houston, Tim and Theresa Woods of Lake Charles, Melanie Woods, and Rachelle W. Hebert of Lake Charles; and step-sister, Carole Drost Lopez of Ocala, Fla. Otray’s love was his six grandchildren and four great-grandchildren. His happiest and greatest times were spent in their company on family outings and vacations.
A gathering of family and friends will begin on Wednesday, Aug. 10, 2022 in Johnson Funeral Home from 4 p.m. until 8 p.m. with a memorial service to be held at 6 p.m. Deacon Josh Page will officiate.
Words of comfort to the family may be expressed at www.johnsonfuneralhome.net.