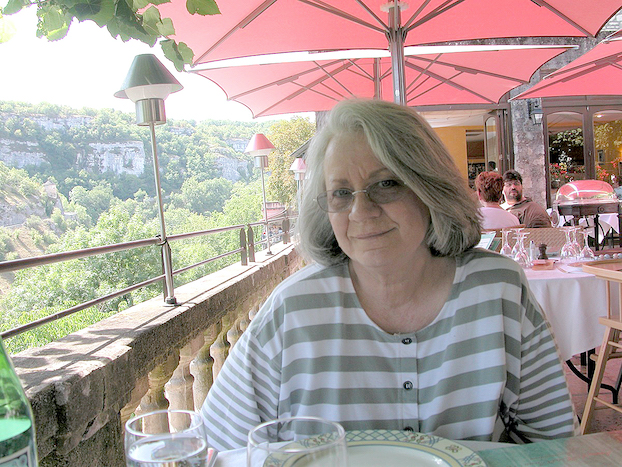 Johnnie Liliedahl has been recognized with the Lifetime Achievement Award by PleinAir Magazine. (Special to the American Press)

A late Leesville-born artist has been honored with a Lifetime Achievement Award bestowed to her husband to mark the couple’s trailblazing efforts in teaching artists across the U.S., Canada and Europe through their art instruction videos.

This summer, Ralph Liliedahl accepted the award from PleinAir Magazine at a ceremony in Santa Fe, N.M., which recognizes the exceptional dedication to art and beauty by he and his wife, Johnnie Liliedahl.

“Johnnie was an exceptional person, not only in terms of her intelligence and artistic ability, but also as a teacher,” Liliedahl told the American Press.

“It should also be remembered that she was a very fine artist in her own right,” he said.

Johnnie M. Liliedahl was born Johnnie McRae in Vernon Parish in 1945, and she entered the world with a love for art. Both she and Ralph graduated from Leesville High School in 1963 and went on to attend LSU, where she was active in theater productions while working towards a degree in economics. She later moved to Oklahoma, where she finished her degree and began teaching at the University of Tulsa.

Though she had put aside her love of art her final years of college, it wasn’t long before Johnnie revived her passion and those around her took notice. She was requested to teach drawing and painting classes and as art began to take the place of economics in her life, she resigned from the university and opened her own art studio, The Mason Jar.

Over the next few years, McRae reconnected with Liliedahl, and the two married in 1985. At the time, Liliedahl was working as a control systems engineer in the electronics field in Saudi Arabia and Johnnie soon joined him there.

In the Middle East, Johnnie’s artistic abilities thrived. She painted and taught in the ex-patriot community and participated in art shows sponsored by the Saudi Royal Family, who are among her collectors.

“We were blessed to be able to see the world and visit the best art museums in Europe during those years,” he said.

In 1986, Liliedahl gave full support to his wife’s passion by joining her as a business partner and the two began producing instructional art videos.

Liliedahl said Johnnie was the “headliner” of their duo, and he served as business manager.

The pair began filming their art instruction videos “in house” without the expense of hiring an outside company to film and edit the videos. This allowed the couple the flexibility to film not only Johnnie, but to travel with their equipment and then film some of the best-known artists in the U.S. in their own studios.

“The bottom line is that she and I were among the first, if not the first, to create the best art instruction videos available in both content and quality,” Liliedahl said.

In 1999, the couple moved to Houston and bought a studio where they expanded their video business by bringing in additional artists. Johnnie continued to travel around the country to teach in-person, and began bringing small groups of artists to Europe to paint “plein air,” the French term for painting outdoors.

Johnnie Liliedahl passed away in 2009 following a battle with cancer. Ralph continued the video operations of their business until 2013, when he sold the rights and equipment to Streamline Publishing whom he said carries on the Liliedahl legacy today. Streamline Publishing also publishes several national magazines, including PleinAir Magazine, which presented the award to Liliedahl in May.

Ralph Liliedahl said he continues to surround himself with his wife’s works as a reminder of their times together. “I’m still very much surrounded by Johnnie in the sense that I still have many of her wonderful paintings in storage, plus quite a few of them hanging in my home. So I’m constantly reminded of her, her art works and the 25 years that we were blessed to spend together,” he said.