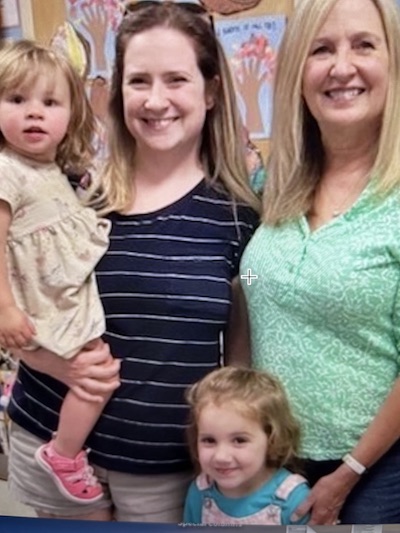 Becoming a grandparent for the first time changed my life 34 years ago on today’s date. That is when Jessica Meek Walker, our first grandchild, was born and she and I have enjoyed extremely close ties since.

Andrew James Beam, my grandson, came along nearly nine years later. I told Bryan and Edith, his parents, at the time how much it meant to me to have a grandson whose middle name is James. It’s not an unusual name, of course, but it’s mine and I get to share it with Andrew.

When Jo Ann, my late wife, and I learned on Christmas Day in 1987 that Jamie, our daughter, was going to have a baby, Jo Ann couldn’t control her emotions. Her happiness made it a day we would always remember.

I can still remember the tears of joy Jo Ann shed when she heard the news that Jessica was on the way. It was a moment she had anticipated for 10 years.

Jessica weighed 7 pounds, 4½ ounces when she was born on Aug. 7, 1988. From that moment on, every waking moment — and some sleeping ones, too — were devoted entirely to the well-being and total comfort of that miracle of miracles.

Over the next few years, I spent as much time with Jessica as possible. I remember the times we spent in the backyard, touching a single blade of grass and the leaf of a shrub and rubbing the coarse bark of a pine tree.

Our backyard swing set got plenty of use. Whenever I pushed her high on the swing, I can still hear her saying, “Do it again! Do it again!”

I taught her how to tie her shoes and took her grocery shopping with me when she was 5. That was quite an experience. On another occasion, she looked closely at my head for the first time.

“Grandpa, you don’t have much hair, but you do have some,” she said. “I saw a man the other day who didn’t have any. You just don’t have any bangs.”

I soon learned there wasn’t anything a grandfather wouldn’t do for his grandchildren. Anything I had was hers, and if I didn’t have it, I’d do my best to get it. When she was old enough, I taught Jessica how to drive.

Jessica has returned the favors a thousand times over with loving hugs for her grandfather that always give me a warm feeling all over. There is something magical about those demonstrations of affection that are indescribable.

Andrew was a toddler when Jessica was 8 and she was fascinated with her tiny first cousin. She couldn’t hold him enough.

What a blessing Andrew has been over the years. He always gives me a hearty greeting and a hug whenever I see him. He became a serious Michael Jackson impersonator when he was in high school, and our family — like many others — enjoyed his performances.

Andrew has become a serious movie critic. Ask him about Batman, Spiderman and almost any other comic book character appearing on the screen and you will get a detailed review.

As grandfathers go, I think I’ve been a fairly good one over the years. However, I had to admit in a column on Father’s Day in 1998 that although I was as dutiful and caring as most fathers, I could have probably been a more attentive father.

Those were the struggling years, and I put too much emphasis on work and the pursuit of a better economic life. I didn’t realize how much I had missed until my grandchildren came along.

Thank goodness Jo Ann was around when Jamie and Bryan needed attention. Their mother deserves a big chunk of the credit for both of them turning out so well.

Aurora Lynn Walker was born on Sept. 29, and at 5 pounds, 8 ounces, she was one of the tiniest babies I had ever seen. Jo Ann and I knew that having her own child was important for Jessica, and we could see the happiness in her face when she first saw her daughter.

Eleanor Marie Walker, my second great-granddaughter, was born on Oct. 7, 2020, which is my birthday. Jo Ann wasn’t here for that great event, but we know she was here in spirit to see another of God’s blessings.