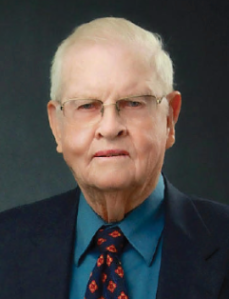 Kevin Patrick “Pat” Gayle, Sr., age 98, was born in Lake Charles, on March 10, 1924, and died Tuesday, Aug. 2, 2022.
Pat retired from farm and cattle operations with W. J. Gayle & Sons, Inc. in 1985 which began with his honorable discharge from the Army on Jan. 1, 1947. He and Rena were founding members of Our Lady Queen of Heaven Catholic Church Parish, and he was the eldest member of the Knights of Columbus Chapter 4562. They spent many years traveling and “motor-homing” across the country with their extended family. Once they stopped traveling, they were active in the Serra Club, continuing to support the vocations to the Catholic Church.
He is survived by his wife of 71 years, Rena Deshotel Gayle. Their children are, Gerianne Gayle Steele and husband Mike of Forest Grove, Oregon; Kevin Patrick Gayle Jr. (predeceased); Mary Gayle O’Brien and husband Randall Serrett; and Thomas John Gayle and his wife Priscilla “Prissy” Piker Gayle of Lake Charles. He is survived by grandchildren, Erica Long Sawyer and husband Jeff; Jared Long; Matt Steele and wife Kristen; Sean Steele and wife Sierra; Melissa Gayle Vidrine (predeceased); Kevin Patrick Gayle III; Andre Mouton; Jean Paul Mouton and partner Ashley Touchet; Andrew Gayle; and Christopher Gayle. He also survived by many great grandchildren.
In addition to his eldest son, he was preceded in death by his parents Bernice Foley Gayle and William J. Gayle; brothers: Thomas, Leonard, Joseph, William “Billy”, John “Buddy”; and, sister, Bernice Lowry.
The family would like to give a special thank you to Dr. Alan Hinton, who added a whole lot of mileage to a pair of tormented knees, worn-out from years of bulldozing, levee-walking and horse-back riding.
A Mass of Christian Burial will be celebrated at 2 p.m. on Friday, Aug. 5, 2022, in Our Lady Queen of Heaven Catholic Church. Monsignor Danny Torres will serve as Celebrant. Burial will follow in Consolata Cemetery under the direction of Johnson Funeral Home. The family will receive visitors at Johnson Funeral Home on Friday, Aug. 5, 2022, from 10 a.m. to 1:30 p.m. with a Holy Rosary being recited at 12 p.m.
In lieu of flowers, donations may be made to St. Louis Foundation, 1620 Bank Street, Lake Charles, LA 70601 or the SWLA Community Foundation, P.O. Box 3125, Lake Charles, LA 70602.
Words of comfort to the family may be expressed at www.johnsonfuneralhome.net.