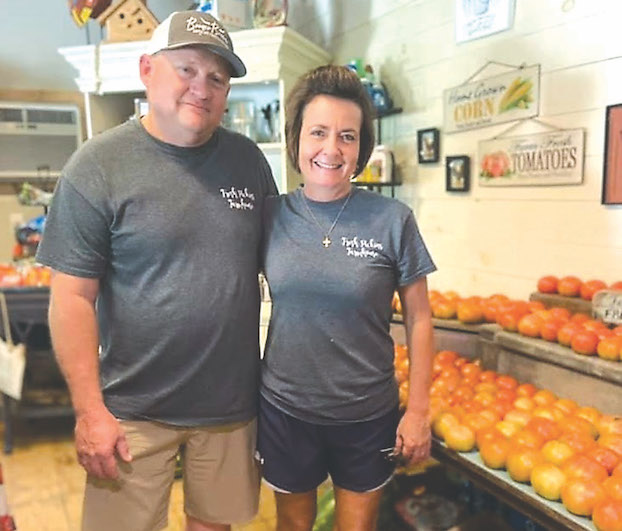 Keith and Dana Guillory work together to produce fresh vegetables and an old-fashioned work ethic among their children and grandchildren. (Special to the American Press)

“More than anything, we enjoy teaching our children and grandchildren the importance of hard work and enjoying the fruits of labor,” Guillory said.

“I put 600 plants in,” Guillory said. “But this year’s drought has been hard on everybody.”

During the Dog Days of Summer, Southwest Louisiana gardens are generally waning, drought or not. However, Fresh Pikins had tomatoes aplenty, and a local farmer had just dropped off a bushel of kieffer pears, good for eating and good for canning.

“I’ve never tasted better bread and butter pickles than these, and I’ve tasted plenty of bread and putter pickles,” said a customer after she paid for her purchase of several jars and put in her order for fig preserves.

“Everytime I’m in the kitchen, I feel like she’s there with me,” Guillory said.

Some of the recipes have been tweaked. One remains the same, her grandmother’s gumbo pickles.

“I’ll put some on my jambalaya,” Guillory said, “but my grandmother always put a little of the juice in her gumbo before she served it. That’s why she called them gumbo pickles.”

Guillory didn’t share the recipe, only that making the popular gumbo pickles allows her to use slightly larger cucumbers missed during the previous day’s picking.

“I taste them first to make sure they’re not bitter,” she said, “then I remove the seeds. My grandmother used mirlitons sometimes.”

Fresh Pickins got its start 10 years ago when Guillory’s father, Carl Johns challenged her to a garden-growing, vegetable-producing contest. (She claims she won.) The gardens produced so well, they started a farm stand, just a tent and a table. She continued to garden because she found the work therapeutic, a way to steer her mind away from life’s worries.

“Young people won’t know how to do these things if we don’t teach them,” she added.

“Every year I take up more and more of his hay pasture with my garden,” she said. “He says if he ever wins the lottery, he’ll go back to farming. I couldn’t do this without his help.”

Every year, Guillory purchases something for the business. Five years ago, it was a little school building with room for display and a pickling kitchen. Her sister-in-law donated the dishwasher. A friend of her son’s had torn out the cabinets and sink and gave them to her. Her brother-in-law gave her the stove.

“This year, we bought plastic mulch with a dripline,” she said. “Next year everything will be on plastic.”

That will cut down on some of the labor. Even so, there will be plenty of work to go around to get plants in the ground, get plants picked and sold while making sure the next generation can turn out their own batch of gumbo pickles.