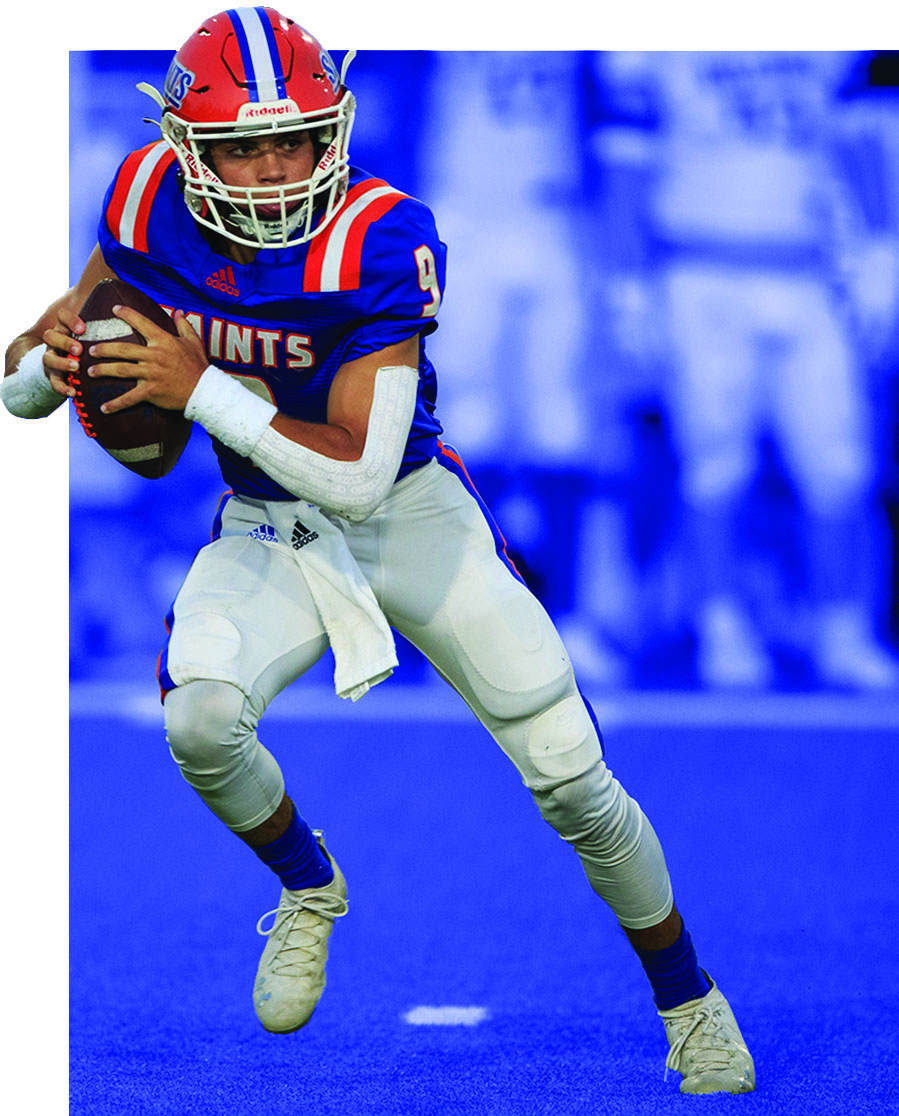 With a season of experience under his belt and a full year to get to know the coaching staff, quarterback James Reina is more dangerous in the St. Louis offense with the goal of making a deep playoff run. (Kirk Meche / Special to the American Press)

After a crash course with a new coaching staff before last season, St. Louis Catholic quarterback James Reina delivered a big season in his debut as a starter, throwing for 1,982 yards and 21 touchdowns while leading the Saints to a playoff berth.

Reina’s goal for this season is to compete for a state title on the gridiron after winning one on the baseball diamond with the Saints as a sophomore.

It was on the diamond that Reina caught the eye of head football coach Brock Matherne, who spent his first day on the job watching the Saints beat Vandebilt Catholic in a semifinal game.

“He’s a competitor,” Mathrene said. “From my first day on the job I remember watching him in baseball. I knew from there what I had. He was a relentless competitor.”

Reina said he was pleased with his play last season but has room for improvement.

“Last year went well,” he said. “It could have been a bit better towards the end, but we have a lot of pieces back this year so we should be successful.”

Preparations for last season were hurried due to Matherne being hired late.

“The coaches came in late so the preparations for the season were condensed into a month,” Reina said. “A lot of work went into it, a lot of sweat and tears, but it ended up working out pretty good.

“My decision-making, reading the defense got better as the season went along. I started second-guessing myself later in the year.”

With a year of experience under his belt and a trio of talented targets to throw to, Reina said he feels the pieces are in place for a standout season.

“I want to win state, that is the ultimate goal,” Reina said. “But, first, we have to take care of business in the regular season, win the district then see what happens when the playoffs come.

“We have a bunch of new linemen, but they have been putting in the work in the offseason and should be good. We have a strong running back in Hank Milligan. Receiver Grant Evans has size and speed on the edges. He can get the long ball. Brooks Habetz and Trey Tate are back. Tate is a good route-runner, is good in space and gets open.”

Reina said his role in baseball isn’t much different from football.

“Baseball is fun,” he said. “I like being the leader of the defense at shortstop. I started playing that when I was 5 or 6. Then I started football as soon as I could in second or third grade. I wasn’t good right away, but it was always fun. Just being out there with my guys, with the team, was always fun even though it took me a few years to start picking it up.”

“The thing he has improved on is understanding our offense, our identity, where we want to put the ball and when we want to do it,” Mathrene said.

“He has been tremendous in his decision-making. Last year everything was so fast — we came in with a brand-new coaching staff and switched everything they were doing, but he handled it well. He did well in tough situations. He was always level-headed; I never had to bring him in and tell him he needed to calm down. That is what you want to see in a quarterback.”