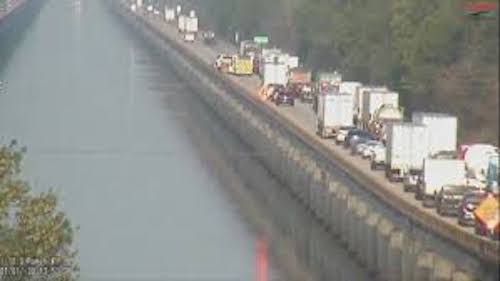 Accidents on Louisiana's Interstate 10 Atchafalaya Basin Bridge cause traffic tie-ups like this one on too many occasions and the Legislature has approved a tougher enforcement law for bridge motorists.wwltv.com

A new state law designed to get motorists to obey the speed limits on the Interstate 10 Atchafalaya Basin Bridge goes into effect Monday, but full enforcement is a ways down the road. In 2021, there were 269 accidents that caused 89 injuries and two deaths on the bridge, double the number of accidents from a decade ago.

Records show when there are major accidents on the bridge traffic could be delayed for 6 to 8 hours. Motorists have to use U.S. 190 to the north or U.S. 90 to the south.

State Senate President Page Cortez, R-Lafayette, and Shawn Wilson, secretary of the Department of Transportation and Development, deserve credit for easy passage of the new law. Both live in Lafayette and drive I-10 to Baton Rouge on most working days.

Cortez said he had to use U.S. 190 once because of an 18-wheeler accident and it took him five hours to go from Baton Rouge to Lafayette. The normal I-10 driving time is 1 hour and 3 minutes.

Cortez said he set his cruise control on the bridge’s maximum 60 mph limit on one trip and “cars were passing me like I was standing still.” He said trucks are supposed to stay in the right lane, but many don’t.

Wilson said on a  recent commute he set his speed limit at 61 mph and he was passed by 42 vehicles. Two of them were 18-wheelers, he said, that are supposed to be hugging the right lane and going no more than 55 mph.

Most motorists detest the use of speed cameras. Sheila Dunn, spokeswoman for the National Motorists Association, told The Center Square back in June, “You don’t always know who is driving the car.” She said a better idea is to spend money on signs that tell drivers how fast they are going.

However, Cortez said, “Cameras are our friends, not our enemies. We’re trying to create some behavior modification. People will not change unless you force them to change.”

Wilson said the new law creates a “highway safety corridor.” He told the  USA Today Network his agency will install the speed-monitoring signs by this fall in an effort to alter behavior before the state begins enforcement with cameras.

Entrance signs at both ends will say, “Safety Corridor, Fines Doubled for Speeding and Other Violations.” There will be eight speed limit signs on each side of the bridge and six sets of “Trucks Right Lane Only” signs on each side.

It may be next year before the enforcement cameras are installed. Drivers caught speeding would first be issued a notice, followed by a warning on the second violation and a fine on the third and subsequent violations.

If drivers knew how much time they were actually saving by speeding, they would be reluctant to exceed the speed limit. Driving 60 mph gets them across the 18-mile bridge in 18 minutes. Cortez said going 70 mph saves only 2 minutes and 40 seconds. Going 80 mph saves a little over 4 minutes, he said.

Cortez and Wilson attribute the spike in accidents on the bridge to increased speeding and distracted driving with cell phones. Both said motorists are more likely to speed on the bridge because they know there are no safe shoulders for police officers to park and monitor speeds.

Cortez said, “If you park police units in some places, they’re less than 18 inches from an 18-wheeler putting them over the edge.”

“Too many people are getting hurt and killed for us not to do something about it,” he said. “I’ve spent 15 years in (the Capitol) and I’ve never filed a bill that’s gotten more attention than this one.”

Wilson told a House committee his department would only capture enough money from tickets to cover the cost of operating the camera system. The rest, he said, would go to law enforcement in Iberville and St. Martin parishes where the bridge is located.

Our readers might be interested in knowing that the new law says, “the Atchafalaya Basin Bridge shall mean the Atchafalaya Elevated Expressway designated by Act 793 of the 1989 regular session of the Legislature as the Louisiana Airborne Memorial Bridge.”

Next time you travel on the bridge, whatever its name, set your speed control at 60 mph, and drive safely.