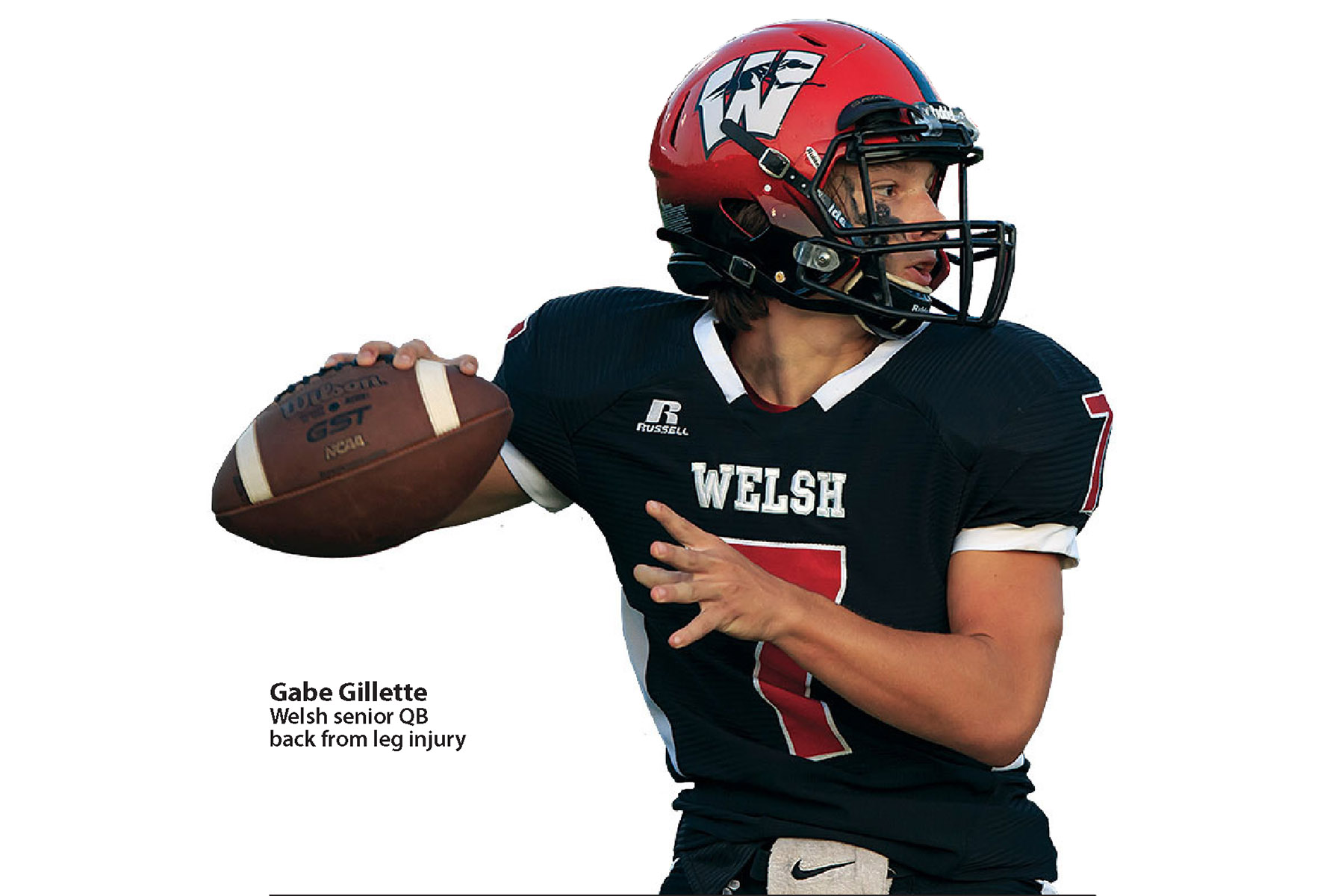 After having his first season as a starter cut short by injury, Welsh High quarterback Gabe Gillett is back, intent on leading the Greyhounds to a long playoff run.

As a junior, Gillett led Welsh to a 3-1 start, running for 307 yards and four touchdowns while completing 9 of 20 passes for 162 yards and one touchdown. A leg injury early in Week 5 sidelined him for the rest of the season. Welsh finished the season 7-5.

Now, with Gillett and a slew of starters back, the Greyhounds want more.

Gillett is hoping to build on the taste of success he had last season.

“It was fun. As a kid you always see the field, see everybody playing and you want to be the quarterback,” he said. “It was a childhood dream come true. The team was starting to mesh really well. I thought I was playing pretty good.”

After the injury, Gillett tried to stay involved with the team as much as possible.

“I tried to be the biggest cheerleader for the rest of the guys,” he said. “I tried to help my replacement as much as I could, help the other guys in any way I could.”

Becoming a better passer has been Gillett’s focus in preparations for his senior season.

“My biggest strength is running the ball — scrambling, picking up yards, making something out of nothing,” he said. “I’m working on improving in the passing game. We didn’t throw much last year but will be implementing that this year. I think it is going to be one of the strengths of our offense.”

Chemistry will be another strong suit.

“We’ve played together since we were 8 or 9 and are very close as a group,” Gillettt said. “I think that is going to translate to the field.”

Gillett said he is benefiting from practice reps against a tough Greyhounds defense.

“I think our defense is really solid and will keep us in games,” he said. “I hope I can help the offense help them out as much as possible.

“We do periods of ones-on-ones, and it is pretty fun. Our first defense is one of the best you’ll see. It’s fun to compete against them every day. It definitely makes me better. Our defense is really fast and gets to you pretty quick. You have to make decisions fast. Once you get to the games everything is slowed down compared to practice.”

Gillett will be joined by Kennon LeGros in the backfield. LeGros ran for 478 yards and nine touchdowns while backing up 1,700-yard rusher Cohen Fontenot.

Gillett says LeGros has all the tools to succeed.

“He has a lot of size and a lot of speed,” Gillett said of LeGros. “He is one of the fastest guys on the team and is really smart. He knows the whole offense inside out and is like having a second quarterback on the field.”

Head coach Cody Gueringer has the answers for all of Gillett’s questions.

“He knows everything about the X’s and O’s,” Gillett said. “If I have any questions for him, it is like reading a book. He has the answers to everything. It’s great.”

“Baseball is fun; it is a lot different than football,” he said. “Football is mostly a physical sport, usually the biggest and fastest are going to win. Baseball is more of a mental game and I enjoy that part of it.”

Gillett said he likes being part of Welsh’s tradition of success on the gridiron.

“It’s great,” he said. “We were all in the seventh and eighth grade when Welsh went to the dome two years in a row. We all got to see what those guys did and what it took to get there.”