Saddle up: Gardere eager to run Broncos to first playoff victory since ’06

Senior running back Dennis Gardere will lead a young Sam Houston team into a new season with the goal of making a deep playoff run. (Rick Hickman / American Press)

He broke into the Sam Houston starting lineup last season and held his own against a solid slate of teams. But running back Dennis Gardere says he wants more for himself and the Broncos in his final season.

“I am pretty pumped up,” Gardere said. “It is my senior season, and I have to do something good.

“I am ready to take on a leadership role, being a senior. Everyone looks up to me. I want to make plays for my team and take them farther in the season.”

The Broncos will be young on the offensive side. Gardere is one of four seniors slated for starting roles, but head coach Chad Davis had a lot of confidence in his running back.

“We had a lot of injuries and a lot of young guys played last year,” Davis said. “We are going to be young on both sides of the ball.

“We have quite a few sophomores that are going to be playing this year, but Gardere is one of the seniors on the offensive side that we are looking forward to being a leader and teaching those young guys the right way.

“Last year was his first year as a starting running back. We expected a lot out of him and he did his part. We are expecting a lot more out of him this year. He has a whole year under his belt and he had an unbelievable summer. He is a guy we are looking at to carry the load on the offensive side of the ball.”

Gardere said he hopes to lead the Broncos to their first playoff win since 2006.

He ran for 766 yards and five touchdowns in eight games last season on 154 carries. He had four games with more than 100 yards, including 189 and two touchdowns in Week 2 against LaGrange.

“I am very fast and I am very strong,” Gardere said. “I use that to find the gaps and get through the hole and get a touchdown.”

“Not only can he run it, he can catch it out of the backfield,” Davis said. “You can split him out wide as a receiver, and he is really good in run blocking. He is our guy this year. If it is short yardage, his number will be called.”

Gardere said the key is the offensive line, where the Broncos return Dennis Meyers, Elisha Morris and Conner Ducote.

“They are the No. 1 priority,” Gardere said. “Without O-line you really can’t do anything.

“The O-line is important to me and we need them more than anything. I think they will be pretty good.”

He averaged almost 5 yards a carry in 2021 but experienced setbacks with fumbles, one facet of his game he has focused on clearing up over the summer.

“I had a fumbling problem last season,” Gardere said. “I had like four fumbles.

“I and my coach have been working on ball security. I looked at tapes from last year to see what I did and try to correct it because I don’t want that happening again this year.” 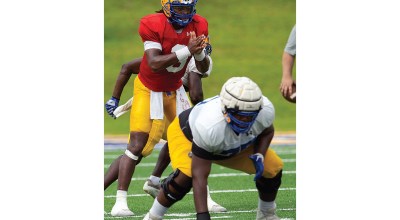 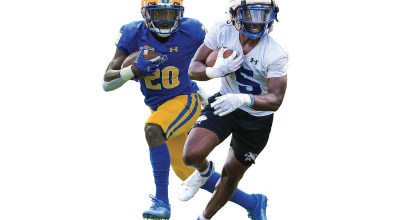