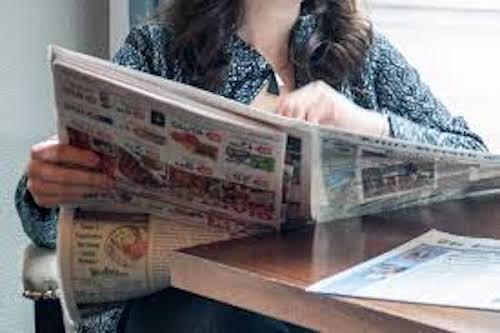 The loss of many of this country's newspapers is continuing, but regional chains like Boone Newspapers Inc. are saving many of them with the company's expertise.Inpmediagroup.com

Newspapers in this country continue to die at the rate of two per week, and no one seems to be able to come up with a solution to stop the losses. Critics will say that’s no big deal, but a piece of this country’s democracy is disappearing with those newspapers.

The Associated Press reported  that the Medill school said news “deserts” are growing. It is estimated that some 70 million Americans live in a county with either no local news organization or only one. And many of those are the elderly, the poor and the less educated who have no reliable source of local news.

The Spokesman Review in Spokane, Wash., explained why that’s unfortunate. It said a Gallup poll conducted in late-2021 found Americans trust local news more than national news. The newspaper also explained one of the major reasons newspapers are hurting.

“As news and advertising has moved from the printed page to the webpage, tech giants Google and Facebook have reaped the benefits, scooping up ad revenue while squeezing the news outlets that create the content on which those online platforms rely.”

While the pandemic wasn’t a major cause of newspaper losses, 360 newspapers have shut down since the end of 2019, all but 24 of them weeklies serving small communities.

Penelope Muse Abernathy, visiting professor at Medill and principal author of its report, said, “What’s really at stake is our own democracy, as well as our social and societal cohesion.”

The Hussman study quoted a former editor and now a columnist at the Democrat-Gazette in Little Rock, Ark., who said, “The watchdogs of school boards, city councils and quorum courts are gone. The chronicles of high school sports teams are missing. To say that this is a sad thing for counties is to understate the case.”

Television and radio can cover some of that news, but not in the depth of coverage that is available in newspapers. Here is a good explanation of how they do that:

The Hussman study said researchers in political science, sociology, and economics have identified three ways strong newspapers historically built a sense of community and trust in our democracy.

Regional newspaper chains are growing and are buying hundreds of newspapers in small or mid-sized markets, and that is a good thing. Boone Newspapers (BNI) is one of those chains and it purchased the American Press. BNI owns and/or manages newspapers and free shopping guides in 91 communities in 12 states.

The BNI organization is able to provide its member newspapers with  research and technical assistance from the many professionals in the organization.

The Medill study said less than a third of the country’s 5,147 weekly newspapers and just a dozen of the 150 large metro and regional daily papers are now locally-owned and operated.

Some in Congress are trying to help halt the newspaper losses by using tax credits to let news outlets hire more journalists and help subscribers and advertisers pay for their services. However, those prospects are rather dim, considering that many Republicans don’t care much for the media.

That’s unfortunate because, during over 60 years in the newspaper business, I have seen much of their worldwide, national, state, and local coverage and many of the great investigative stories they have published. They have also kept their local communities well-informed about local and national events.