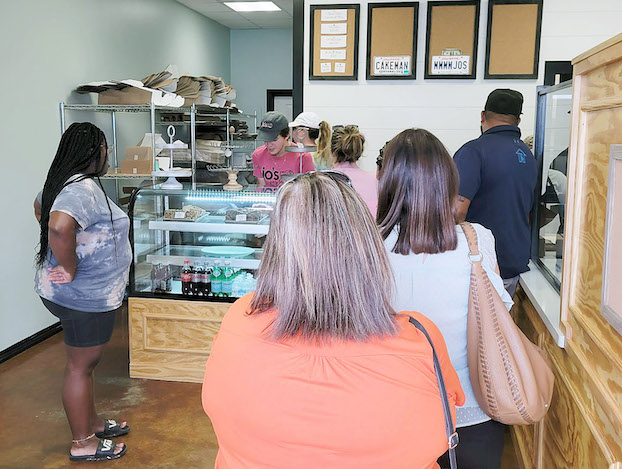 Jo’s Cupcakes has been such a popular addition to the Moss Bluff community that they’ve sold out several times. The line continued down the sidewalk outside the store. (Rita LeBleu / American Press)

Despite the challenges of workforce issues, supply chain problems and a struggling economy, small business is booming in Moss Bluff.

On Tuesday, June 28, the line for Jo’s Cupcakes snaked down the counter and out the door. The line wasn’t as long as it was on the first day. Traffic wasn’t impeded. But the new Moss Bluff bakery did sell out again, and not for the first time since opening at 909 Sam Houston Jones Pkwy.

“With only two tire shops in Moss Bluff, I felt like our community needed another option,” VanWinkle said.

In addition to selling and installing tires, Titan does auto repairs, oil changes and caters to off-road enthusiasts with lift wheel kits.

Now creative types don’t have to drive so far for their craft supplies, good news particularly now when gas prices are high, according to Hill.

Tiffany Daley and Alison Degeyter know the Moss Bluff culture and market well. The sisters grew up there. They’ve developed their own “niche.”

“We bring children’s play areas to events and homes that are specifically designed for small children,” Daley said.

She said at many events, small children end up in strollers or being held as their older siblings find suitable play. The Soft Play Sisters offer a safe and fun environment for children as young as a year to interact with and develop social and gross motor skills.

Sway Boutique and Gifts “hopped across the parking lot” to expand its space at 277 U.S. 171, going from 900 square feet to 2,400 square feet, according to owner Brittany Derouen.

Gracie Barra, a jiu jitsu school for students 4 and up, will open its new Moss Bluff location soon, according to Genna Davis, program director.

Market Basket Foods is set to complete repairs from the hurricanes and open this summer.

“Moss Bluff is growing because there’s available land to develop commercially and residentially,” said Police Juror Mike Smith. “The school system is good and these are factors that are attractive to home buyers.”

Smith and Marjorie Harrison, Director of Calcasieu Parish Public Libraries, reported on the status of library repairs and other hurricane cleanup.

“Repairs are underway on the Moss Bluff branch library,” Smith said. The police jury has been cleaning up laterals. Like other areas, having clear drainage is key. We’re also looking to expand River Bluff Park. That work has been held up because of the hurricane. We hope to add a multi-purpose type building to use as an event center.”

Harrison said the library will be back in October, with improvements.

“We had a lot of repairs and took the opportunity to make some changes,” Harrison said. “Not only are we building back a more functional resilient facility, we’ve planned some changes sure to appeal to children and teens.”

Harrison said the layout will change. Paint is all new. Lighting is all new. Meeting room flow and egress has been improved. An outside area has been fenced in. Though it might not be in place as soon as October, furnishings will be updated.