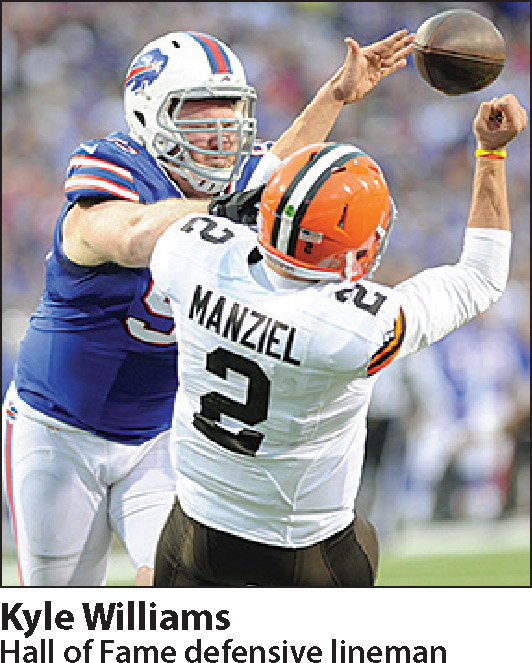 EDITOR’S NOTE: Eighth in a series about 10 inductees to be enshrined in the Louisiana Sports Hall of Fame on Saturday in Natchitoches.

Kyle Williams was never one who craved attention.

When it came time to announce his college choice coming out of Ruston High School, the burly defensive lineman rated among the top defensive tackles in the nation let his family know first when he quietly gifted his mother an LSU sweatshirt on Christmas Eve.

“I wanted to make the right decision for myself and my family,” the young Williams said in December 2001. “I wanted my friends and family to be able to see me play. It turned out that the place I was most comfortable was LSU.”

Unlike today’s frenzied recruiting news cycle, it took a few days for Williams’ decision to appear in a local newspaper — and even then, the blue-collar blue-chipper kept it low-key. That was Kyle Williams — then and now.

“It’s not my place to judge how people do or don’t do things,” Williams said. “But I can tell you that I felt like the people who poured the most into me and had the most impact on me, that’s who deserved to know. That’s who I thought I needed to share that news with; they needed to know about my plans and they deserved it. I didn’t need to make a big spectacle about it and I didn’t need any attention about it. I had gotten all the attention I needed, which was an opportunity to go play football.”

Williams certainly wasn’t seeking fame throughout a football career that took him from Ruston to LSU and eventually 13 seasons with the NFL’s Buffalo Bills, yet his steady approach, quiet leadership and rugged production gained him much appreciation from fans of those teams. His body of work also impressed the Louisiana Sports Writers Association, which honored him as a first-ballot Louisiana Sports Hall of Famer for the Class of 2022.

“Honestly, to look back and to have played football as long as I did and to represent three places that have as rich a tradition and are football-oriented communities, who love their teams and love the people, there couldn’t have been any better places for me and what I value and think is important,” Williams said. “Those three places really, really personify those things. It was a perfect fit.”

The appreciation for Williams was never more evident than after his final game as a member of the Bills. The stoic lineman made a heart-warming victory lap around the perimeter of Buffalo’s stadium while high-fiving members of the “Bills Mafia” as the crowd roared in admiration.

“It wasn’t something I had in my mind to do,” Williams said. “The lap wasn’t really planned but my kids and wife came down to meet me and people started filtering down the stairs. It ended up being crowded around the interior and I made a lap. More than anything, I wanted them to know that I appreciated them for supporting me and my team all the years I was there.”

With his wife, Baton Rouge native Jill, and their five children there to witness the spontaneous celebration of his career, Williams made sure to pull the kids aside to explain what was happening — and why.

“I said, ‘The only reason we were able to do all these things today and have a connection with a franchise and a community is because I made that decision.’ If anything good ever came out of my NFL career, hopefully it’s that my kids saw that and heard that and what that can lead to, if you follow that way of thinking.”

Williams grew up in Ruston during what he calls the “heyday” of Bearcats football in the 1980s and 1990s and he couldn’t wait to join the team.

“I was a young kid running around watching those guys and knowing about those guys,” Williams said. “It probably hit a lull there in the mid-’90s, but when coach Tommy Reeder took over when I was a freshman, we really saw some good years. We lost in the state championship in 1998 and in the semifinals the next year. We had some really good teams and some really good players too. I was high school teammates and friends with Jack Hunt, who went to LSU, Robert Peace who went to Tennessee, and Jeremy Hamilton who went to Louisiana Tech. Just on and on. We had some good teams and good players back then.”

Coming out of Ruston, Williams rated as one of the nation’s most coveted defensive line prospects. He was named the Class 5A Louisiana Defensive MVP after recording 78 tackles, 17 for losses, seven sacks, four fumble recoveries and an interception for Ruston as a senior.

In 2002, Williams joined a rising LSU team coached by Nick Saban and took over as a starter at defensive tackle midway through the 2003 season. As a sophomore that year, Williams made 41 tackles over LSU’s 14 games with 6.5 tackles for losses and four sacks for a team that won the Bowl Championship Series national championship by beating Oklahoma in the Sugar Bowl.

Williams played in 46 games at LSU, starting 33 times and recording 16.5 sacks with 26 tackles for losses. Finishing his college career under Les Miles, Williams earned second-team All-America honors in his senior season of 2005.

The Bills picked Williams in the fifth round of the 2006 NFL draft and wound up with one of the great leaders in franchise history. Williams ranked fifth in team history in tackles (610) including a club-record 48.5 sacks by a defensive tackle. He played in 183 games overall and started all but five. A six-time Pro Bowl selection, Williams was named a second-team Associated Press All-Pro for the 2010 season.

“It’s a really tight-knit community there,” Williams said of the Buffalo area. “As far as game-day experiences, for the NFL, it really doesn’t get much better. The people there are wild about their community, their football team. It could not have fit any better. … People in Buffalo celebrated grit as much as they celebrated talent.”

Williams was a rock for Buffalo despite plenty of changes. The franchise had two owners, six general managers, seven head coaches and eight defensive coordinators during his career.

“One of the things that I appreciate about Kyle was not only his play on the field, but his leadership, man,” Bills defensive coordinator Leslie Frazier told the Buffalo News in 2021. “I remember last year when we won our first playoff game, I texted … to thank Kyle for his leadership because he had so much to do with the foundation that was laid here that has allowed us to have the success that we’re currently having.”