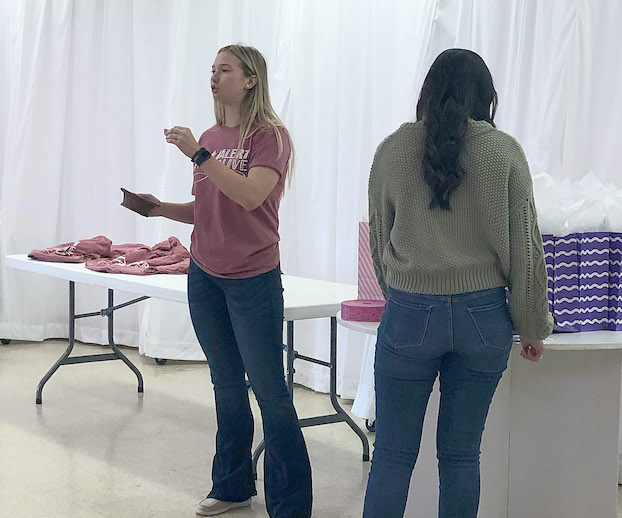 The young and inspirational Gracie Myers, an Ambassador-level Girl Scout, has earned the Gold Award for her project “Stay Aware, Stay Alive Class.”

Earning the Girl Scout Gold Award is no easy feat as it is the most prestigious award in scouting.

Myers earned the award with a project that both informs and educates women about the impacts of sex trafficking in the Southwest Louisiana area.

Living in fear is not the goal of Myers’s project; instead, it teaches individuals to stay alert and alive.

“There are women all around the world that fall victim to sex trafficking every single day,” she said. “Living in communities along Interstate 10 places an added danger to women. An

Myers partnered with the Calcasieu Parish Sherrif’s Office and the Welsh Rotary Club to hold a class that would provide valuable information to her target audience: girls in their senior year of high school.

Her goal was to educate them on methods of prevention and self-defense.

She said she instantly knew “how large of an impact it could make and how we could take it to the next level.” The most considerable challenge, she said, was to face self-doubt.

Myers said she was worried she was taking too large of a risk and girls would not attend.

“Upon holding this class and sharing with my local rotary club I have reached many different age groups concerning this issue which is beyond what goals I set for myself,” Myers said. “The class was a huge hit and taught me enough to be an advocate for this topic to continue to share.”

The results showed success as the turnout was great, and she claims she “would love to do it again next year.”

Myers has been an active scout for 13 years. As an active member, she wishes to advocate that Girl Scouts are more than cookies and camping because the organization has “shaped me into the woman that I am by providing a strong foundation of what I am capable of.”