Cotten’s Downtown burgers even better than a ‘homeburger’ 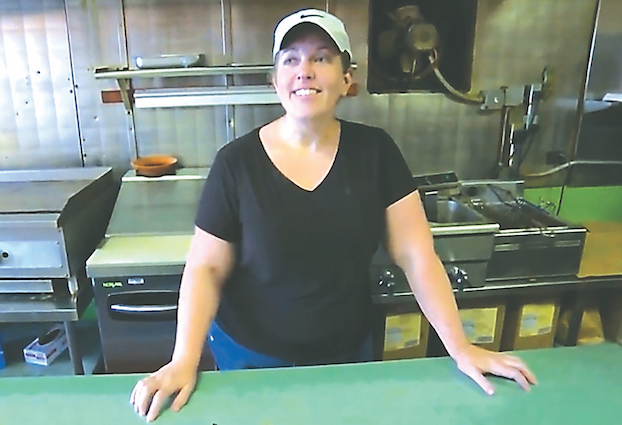 Kate Cotten, owner of Cotten’s Downtown, said her hamburger patties are hand-formed, which causes them to be more porous. (Special to the American Press)

When it’s time to satisfy the craving for an old-fashioned or specialty burger, trust Kate Cotten and Will Ward. Kate Cotten is the owner of Cotten’s Downtown. Located in downtown Lake Charles, this diner has an atmosphere that’s as old-fashioned as the burgers. Ward’s been working with Cotten since he was a youngster. The two serve up food quicker than a nearby “fast-food” joint – and for the same price.

The taste, though. Cotten’s Downtown burgers and fries taste like burgers should, the way burgers tasted before fast food restaurants, before restaurants of any kind, became ubiquitous. It tastes better than a homeburger and a homeburger is hard to beat.

“I think it’s about the freshness,” Cotten said.

Cotten is a matter-of-fact kind of person, no elaboration, no pretense.

“We hand-form our patties,” she said. “Other restaurants buy fresh formed patties, but they’ve gone through a machine. Maybe it’s because our patties are more porous but it makes a difference in the way the meat cooks.”

The bread is also fresh. Cotten is currently growing her own tomatoes at her downtown loft, which is walking distance from her restaurant. That’s sure to make an already delicious old-fashioned hamburger more delicious and old-fashioned.

“Can you believe it? I’m 41, and I’ve never had a garden,” she said. “I started growing a few things hoping to save money.”

She admits there is a learning curve, and then there’s blossom-end rot to deal with, which she seems to have done.

Next to freshness, she thinks the Cotton’s Downtown’s burger success, as well as the success of its other menu items — including delicious onion rings — is due to the diner’s consistency. Ward has been a big part of that,” Cotten said.

“He cares; that’s the difference,” she said.

One gets the impression talking to Cotten that she doesn’t think being able to make a great old-fashioned burger consistently isn’t a feat worth crowing about.

Dwight Theirry is the third person that rounds up the Cotten’s Downtown team.

“When I was planning to start this place, someone said I didn’t want to be on the grill with my back turned to the customers. I should be at the register to watch the money,” she said.

If someone stole from her, she responded, she could deal with that and it wouldn’t happen again. However, if the person on the grill puts out bad food, that means a customer is lost forever. Cotten couldn’t deal with that.

In this old-fashioned atmosphere is old blues music salting the atmosphere. It’s not intrusive or depressing. It seems to belong. The wall decor adds a little funky fun. Cotten said she’s not into an update mostly because she’s “not a huge fan of change.”

“I remember when we didn’t have the internet,” she said, “and technology fights me a lot. I like simplicity.”

Fish and shrimp are on the menu. Specialty burgers include Jim Serra’s Hot Button Burger, an old-fashioned bacon egg cheeseburger with jalapenos and Sriracha. The Donut Burger is served on a lightly glazed donut and the Jamgood is topped with cream cheese, locally made seven-pepper jelly, fried bacon and onion fries.

COVID has posed challenges to all local restaurant owners. Hours were curtailed at Cottens. Currently it opens for breakfast and lunch at 110 Broad St., 7 a.m.-3 p.m. Monday-Friday.